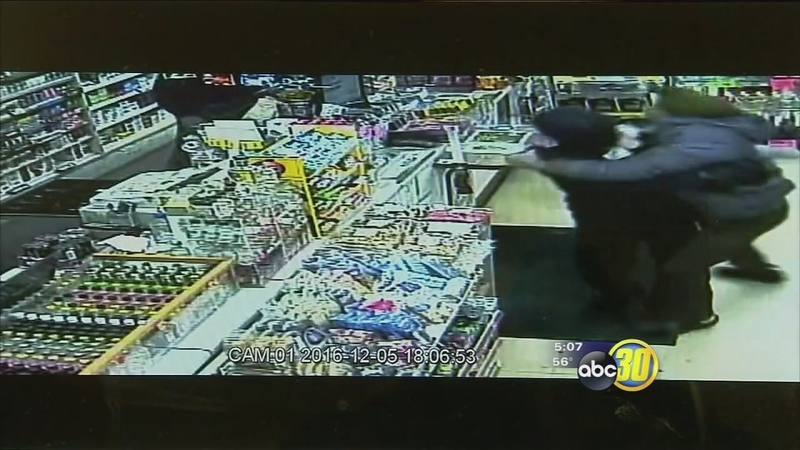 MADERA, Calif. (KFSN) -- Surveillance video of a Madera convenience store robbery shows employees taking down a suspect after he tries to rob their store a second time.

Danny Singh said he was there on Monday when a man who had robbed the Madera mini mart just 10 days prior came in again.

"We were not expecting this-- we've been here for a long time, 22 years, never had an instance like this."

The Madera Sheriff's Office said they arrested a 17-year-old man for the crime and that he did not actually have a gun.

"Demanded money, gave clerk 10 seconds to give him money, and held some object that appeared to gun under a black bag."

A little more than a week later the suspect came back hoping to have the same luck.

The Sheriff's Office said based on the report and surveillance video the suspect did the same thing as the first time. He came in looking armed and demanding money-- only this time the employee working took matters into his own hands.

"His attention was to the money so he grabbed them from the behind. I was here, he was on the other side, so both side we grab him," said Singh.

District Attorney David Linn said the juvenile faces two counts of robbery. He said they have not only filed the petition required but also the motion to disqualify the juvenile judge and have another judge to try him as an adult.

"We did a search of his home with his mothers permission and we found items stolen in the robbery 10 days before. This young man clearly has a problems and I don't believe it's one that can be adequately addressed in the juvenile justice system."

Singh said he hopes that motion also follow through

"The way he did it is armed robbery-- it's not a minor thing, it's a big thing."

Police said the employees did what they believe what right and it worked out for them. However, they do want to remind everyone that if you are involved in a robbery, assume the weapon is real and to be cooperative.
Related topics:
maderateenagermaderamadera countyarmed robbery
Copyright © 2021 KFSN-TV. All Rights Reserved.
MADERA COUNTY
Evacuation warning lifted for Coarsegold area
Looking back at the ups and downs of COVID in Central CA
Wildfire burning in Madera County 100% contained: CAL FIRE
Do Valley law enforcement agencies reflect diversity of their communities?
TOP STORIES
Man drowns at Fresno's Island Water Park
Local churches open doors to 100% capacity
Man steals catalytic converter in seconds in Fresno
Evacuation warning lifted for Coarsegold area
2 drivers killed in fiery crash near Firebaugh
1 killed, 2 injured in central Fresno shooting
15-year-old boy Fresno drowns in Millerton Lake
Show More
2 street racing suspects arrested in Fresno
Be careful around Fresno Co. lakes, rivers this weekend
Power outage hits at least 15,000 homes across Valley
West Nile Virus detected in Fresno County
Warning about poor air quality in Valley
More TOP STORIES News