At Least One American on Board Doomed Flight 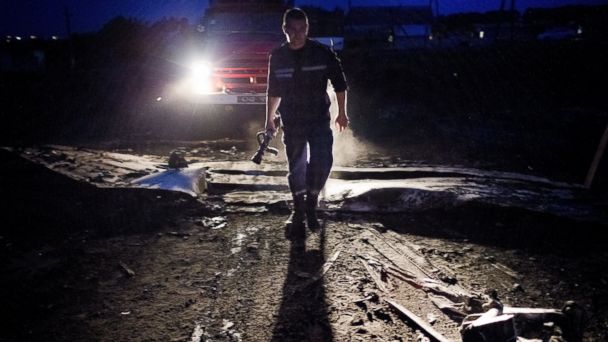 At least one American was on board Malaysia Airlines Flight 17 carrying 298 people when it was shot down by a missile over Ukraine, President Obama said today.

The State Department identified the victim as Quinn Lucas Schansman, a US-Dutch citizen.

Obama also called for an immediate ceasefire in the region among Ukraine, Russia and Russian-backed separatists in order to conduct an investigation into the crash site in eastern Ukraine.

Can Malaysia Airlines Endure a Second Tragedy So Soon?

U.S. officials said earlier today that intelligence showed nothing that definitively links Russia to the training of those who launched the missile on Thursday, U.S. officials told ABC News.

But officials did say that based on preliminary intelligence, they believe the missile was an SA-11 and that they have reports showing an explosion in the air following the missile launch.

In addition, an official said the missile was fired inside Ukraine in a territory controlled by Russian separatists. Ukrainian authorities told U.S. Embassy officials Thursday that debris was spread out over a 10-mile path near the town of Hrabove in the Donetsk region of eastern Ukraine.

Intelligence and analysis of the situation determined that it was a single surface-to-air missile that struck the Boeing 777-200 aircraft while at cruising altitude, a U.S. official told ABC News on Thursday.

"This was a global tragedy," said Obama. "There has to be a credible international investigation into what happened."

Earlier today, Samantha Power, U.S. Ambassador to the United Nations, told the U.S. Security Council that U.S. officials can't rule out whether Russia helped launch the missile that shot down the jetliner.

"Because of the technical complexity of the SA-11, it is unlikely that the separatists could effectively operate the system without assistance from knowledgeable personnel. ... We cannot rule out technical assistance from Russian personnel in operating the systems," she said.

The pro-Russian separatists, who control the area where the jetliner was brought down, have agreed to allow investigators safe access to the site today in order to recover bodies and gather evidence, according to a statement from the Organization for Security and Co-operation in Europe.

The plane had left Amsterdam at 12:15 p.m. Thursday (local time) and was en route to Kuala Lumpur International Airport, where it was scheduled to land today at 6:10 a.m. (local time), according to Malaysia Airlines.

Malaysia Transport Minister Liow Tiong Lai, speaking at a news conference this morning, said initial indications show the plane was shot down, calling it "an outrage against human decency."

"Malaysia condemns any such action in the strongest possible terms, and calls for those responsible to be swiftly brought to justice," he added.

Malaysian officials are calling for an independent international investigation into the incident.

Malaysian officials have said that 189 passengers were Dutch. In addition, according to officials at a news conference this morning, 44 were Malaysian, 27 Australians, 12 Indonesians, nine British, four Belgians, four Germans, three Filipinos, one Canadian and one New Zealander.

Nationalities of three other passengers remain unknown at this time.

Among the victims identified were the Gunawan family, relatives of an ABC News employee. Hadiono Gunawan, an employee of Malaysia Airlines, was headed to the Philippines for a family vacation.

His wife, Irene, and their two children, Daryl and Sherryl, were traveling with him.

Karlijn Keijzer, a Dutch student studying in the United States, was going on vacation with her boyfriend.

"I'm just in disbelief and expecting Karlijn to pop up on Facebook and tell everybody she's OK," Keijzer's friend, Rachel Weigler said in a phone interview with ABC News.

Amid the tragedy were unbelievable twists of fate. Sarah Moonen said her brother and a friend were bumped from the flight at the last minute, but two of their friends boarded the jetliner.

"I felt bad for feeling good that my family hadn't been ruined and that my brother was alive," Moonen said.

Members of the tight knit HIV/AIDS community are mourning the loss of roughly 100 HIV/AIDS researchers, who were killed en route to the International Aids Society conference in Melbourne, Australia.

The World Health Organization announced on its Twitter account that spokesman Glenn Thomas was on board the jetliner.

A statement from the Foreign Ministry in Kiev just hours after the incident claimed the plane had been "shot down."

"According to the General Staff of Ukrainian Armed Forces, the airplane was shot down by the Russian Buk missile system as the liner was flying at an altitude of 10,000 meters [33,000 feet]," the statement read. "Ukraine has no long-range air defense missile systems in this area. The plane was shot down, because the Russian air defense systems was affording protection to Russian mercenaries and terrorists in this area. Ukraine will present the evidence of Russian military involvement into the Boeing crash."

Ukrainian President Petro Poroshenko later added, "We are not calling it an accident, or a disaster, but an act of terrorism."

A Kremlin statement said that Russian President Vladimir Putin had opened a meeting with his economic advisers by calling for a moment of silence over the incident.

"This tragedy would not have happened if there were peace on this land, if the military actions had not been renewed in southeast Ukraine," he said. "And, certainly, the state over whose territory this occurred bears responsibility for this awful tragedy."

This is the second Malaysia Airlines plane to be involved in an air tragedy this year. On March 8, Malaysia Airlines Flight MH370 vanished with 239 people on board after it took off from Kuala Lampur bound for Beijing. Malaysian officials said the plane disappeared somewhere in the Southern Indian Ocean, but no wreckage has been recovered.