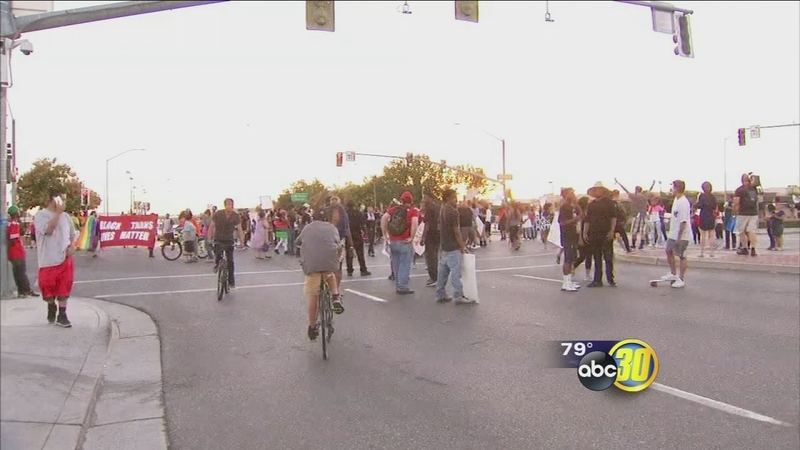 A social media protest calling for the shut down of Shaw and Blackstone Avenues in response to recent officer-involved shootings across the country garnered traction throughout the week.


The frustration came to a head around 5 p.m. when hundreds of protesters came out. Authorities shut down portions of Shaw and later Bullard Avenues as the protesters moved and eventually came back to Shaw and marched into Clovis.
EMBED More News Videos

The Highway 41 off-ramp was shut down at Shaw as a precaution. Protesters went into the streets during rush hour traffic chanting anti-police rhetoric while holding signs.

Multiple agencies have responded to the protest which has continued for several hours.

Several businesses closed early for the day in anticipation of the protest.

"It will cut down our income by a lot today because we really strive on our dinner hours on Saturdays," Hisham Qutob at Med Wraps Cafe said.
"It's a four-hour difference between us staying open and closed so it's going to take a significant toll," Sophia Ortiz with DXL Men's Apparel said.

At one point, a large group of protesters entered Fashion Fair Mall several times but left peacefully. The crowd walked eastbound and headed towards Fresno State before entering Clovis.


So far, no injuries have been reported but police have reported rocks and water bottles being thrown at officers.

By 9:30 p.m., hours after the beginning of the protest and 8.5 miles away from the origin, the group wound up at Clovis Police Headquarters where several protest leaders spoke to the crowd. Community activist Pastor DJ Criner also addressed the crowd and urged them to disperse and return to Fresno.