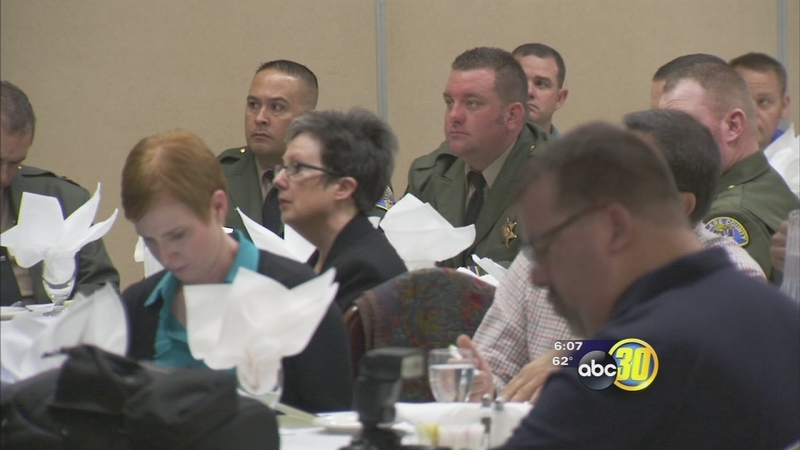 TULARE, Calif. (KFSN) -- A meeting of minds in the South Valley Thursday to combat thieves who are ripping off local tree nut producers.

So far, the sophisticated crime ring has made off with millions of dollars worth of product.

Millions of pounds of pistachios are processed at Horizon Nut Company in Tulare. The grower-owned business feeds the world, shipping as far away as Europe, Asia, and the Middle East. But recently horizon became the target of crooks hungry for a big profit. They made off with an entire truckload, $400,000 worth, of pistachio kernels. The truck driver was completely unaware, thinking it was a legitimate load. When in fact, the documents were forged.

The truck headed south to Los Angeles and the load was taken right to the waiting thieves. This kind of heist is happening all over the Central Valley with losses into the millions. Investigators believe the stolen goods are likely headed to Eastern Europe. "What we're seeing now, this year, is another level of sophistication. Theft is occurring by hacking into computer systems and getting order numbers," said Richard Matoian, American Pistachio Growers.

Thursday, the American Pistachio Growers and Western Agricultural Processors Association hosted an emergency summit on tree nut theft. "Wanted to make sure everyone in our industry is aware of what they need to do to protect themselves," said Matoian.

Law enforcement, including the CHP, FBI and Tulare County Sheriff's Department educated attendees on anti-theft measures, and how the crooks are operating. "They're definitely criminal syndicates. They're very organized. Very good at what they do," said Sheriff Mike Boudreaux, Tulare County.