More than 40 percent of California out of drought, officials say 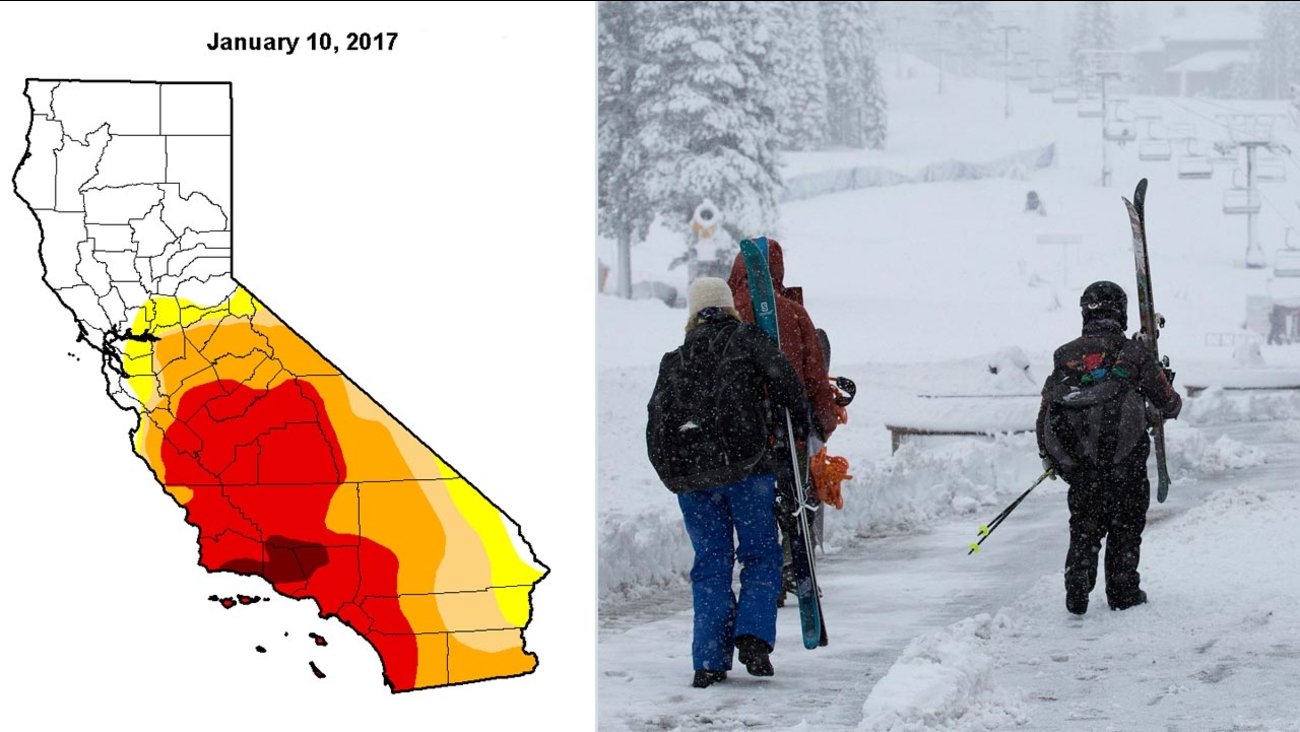 SAN FRANCISCO -- More than 40 percent of California has emerged from a punishing drought that covered the whole state a year ago, federal drought-watchers said Thursday, a stunning transformation caused by an unrelenting series of storms in the North that filled lakes, overflowed rivers and buried mountains in snow.

Southern California, also receiving welcome rain from the storms, remains in drought but has experienced a dramatic reduction in the severity. Just 2 percent of the state, a swath between Los Angeles and Santa Barbara, remains in the sharpest category of drought that includes drying wells, reservoirs and streams and widespread crop losses. Forty-three percent of the state was in that direst category this time a year ago.

California will remain in a drought emergency until Gov. Jerry Brown lifts or eases the declaration he issued in January 2014, while standing in a bare Sierra Nevada meadow that one of the state's driest stretches on record had robbed of all snow.

State officials said this week that Brown will likely wait until the end of California's winter snow and rain season to make a decision on revising the drought declaration.

For Northern California, at least, the onslaught of storms that brought the Sierras their heaviest snow in six years and forced voluntary evacuations of thousands of people as rivers surged will likely make it a much clearer call for the governor, water experts said.

"It's hard to say we have a drought here right now," said Jay Lund, director of the Center for Watershed Sciences at the University of California at Davis, an area near Sacramento that was awash after its heaviest rain in 20 years.

Lund spoke on his way back from taking students to see flood gates on the Sacramento River, opened by state officials Tuesday for the first time in 12 years to ease pressure on river banks and levees.
The opened gates were spilling a two-mile torrent of excess water into public lands in the Sacramento Valley, alongside the equally raging Sacramento, the state's largest river.

The past week's storms were enough to double the snowpack in parts of the Sierras, runoff from which provides Californians with much of their year-round water supply. Stations up and down the mountain chain were reporting twice the amount of normal rain and snow for this time of year.

The state's reservoirs were brimming above average for the first time in six years.

"It's been so wet in some places this winter we would do pretty well even if it tapered off right now," said Daniel Swain, a fellow at the University of California at Los Angeles whose weather blog has been a closely watched chronicle of the state's drought.