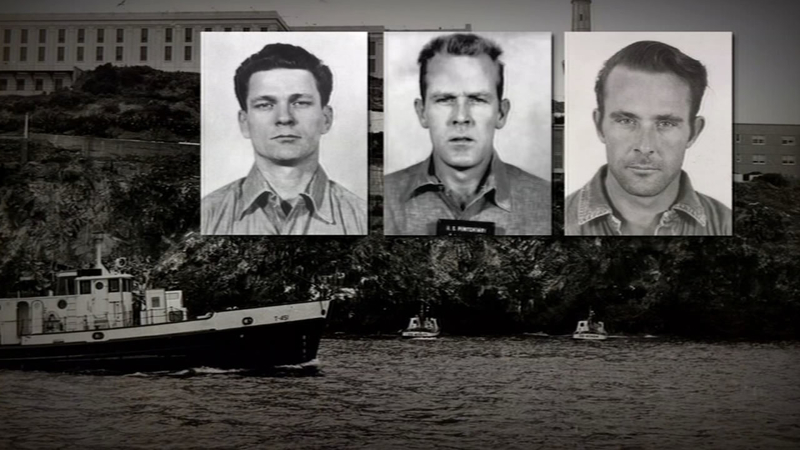 ALCATRAZ, Calif. -- There's a new lead in the search for three men who escaped from Alcatraz 54 years ago -- the longest manhunt in United States history. The ABC7 News I-Team's Dan Noyes tracked down an eyewitness who may help connect some key clues in the case.

Escape from the federal prison on Alcatraz was supposed to be impossible. It was known as the toughest prison in the nation and the toughest criminals in the country, including Al Capone, Mickey Cohen, Machine Gun Kelly and Whitey Bulger were incarcerated there.

But on June 11, 1962, convicted bank robbers Frank Morris, John Anglin and his brother Clarence Anglin waited patiently until shortly after the last bed check at 9 p.m. before they made a daring escape. The men posed dummy heads made of plaster and paper in their beds and squeezed out of holes they had cut in the walls of their cells with sharpened spoons and homemade chisels. They emerged in a utility corridor that ran behind the cells. They climbed up to the top of the cell block on protruding pipes. They managed to make it up outside to the roof of the cell block. And then the three shimmied down to the ground where they inflated life vests and a raft made of prison raincoats.

Investigators believe they went into the water just before midnight and they were never seen or heard from again.

The lone federal lawman still on the case, still investigating the escape and hunting for the convicts, is supervisory Deputy U.S. Marshal Michael Dyke. It is only one of the cases Dyke handles along with running the Oakland office of the U.S. Marshals Service.

Dyke said, "I give them a lot of credit. All the work they did. That's months of work without getting caught."

Dyke said what they did was wrong but he understands why the public is enthralled with the mystery of what really happened that night 54 years ago to Morris and the Anglin brothers.

"They were able to do what nobody else has done and get completely off the island and never be found -- if they lived," Dyke said.

Dyke says he is still following several leads in the case, but he does not spend a lot of time or money on it. The Marshals service took over the Alcatraz escape case from the FBI in 1979. Some investigators believe the escapees drowned in the Bay that night and never made it to freedom but there isn't any definitive evidence to prove it.

Now the family of John and Clarence Anglin say a photograph taken in 1975 shows the brothers alive and well and living in Brazil. An old family friend brought the photograph to the Anglin family in the 1990's. Fred Brizzi told the family he ran into the Anglin brothers at a bar in Brazil where they were living and working on a farm they had purchased.

Brizzi was an interesting character who knew the two escapees from when they were growing up in Florida together. Now deceased, Brizzi was a pilot who went to prison for smuggling drugs from Latin America to Florida. But before he died, Brizzi brought the photograph to the Anglin family and an expert in photo analysis believes it most likely is a picture of John and Clarence Anglin. The age and condition of the photo and the fact that the men are wearing sunglasses hinder experts' abilities to make a definitive determination.

Dyke says Brizzi was a conman, and an expert working for the U.S. Marshal's Service does not believe the photograph is legitimate. Dyke says measurements of the physical characteristics of the Anglin brothers indicate it is not them in the Brazil photo, but even he acknowledges the difficulty in making a definitive determination and ruling it out as a valid lead completely. He continues to investigate the Brazil photo as a lead in the case, despite his doubts about Brizzi and the picture.

But Dyke has another lead in the case he's trying to figure out. A deathbed confession has surfaced and the ABC7 I-Team tracked down an eyewitness who could help connect the clues.

According to people who have seen and read the entire document, the deathbed confession was dictated to a nurse by a dying man who wanted to come clean about his role in the escape from Alcatraz.

The dying man told his nurse he and an accomplice helped Frank Morris and the Anglin brothers escape from Alcatraz.

The confession indicates the two men were waiting in a boat on the Bay near Alcatraz the night of the escape and they plucked the three convicts from the water and whisked them away. The confession is very detailed and it says the men painted the boat white just days before they set out to assist in the prison break.

Robert Checchi was an off-duty San Francisco Policeman sitting in his car just before midnight at Marina Green that evening.

He was gazing out at the Bay when he noticed what he calls a "pristine white boat." Checchi says he immediately felt like something was wrong because the boat had no lights on. He didn't see anybody on the boat and he couldn't hear any noise coming from the boat.

But after watching the boat intently for several minutes, Checchi said a light went on. He says somebody on the boat was shining a spotlight or a flashlight into the dark waters of the Bay. He told ABC7's I-Team it just didn't look right.

"I said this is really unusual," Checchi said.

He said, "It started moving out and the port and starboard lights came on. I couldn't tell whether it went north or south, it just disappeared into the dark."

The next day, when Checchi found out there had been an escape from Alcatraz, he went in to work and filed a report about what he had seen. The FBI questioned Checchi for days and days and sometimes the interrogations got somewhat nasty.

Checchi has never told his story on television before but he explained to ABC7 Investigative Reporter Dan Noyes how the FBI agents asked him over and over again, "what did you see; where was it; what time was it" and even "How come you didn't swim out to check the boat out."

Checchi recalls one FBI agent said to him, "Like hey, let's make this go away. Let's bury it."

Michael Esslinger might be the preeminent scholar on Alcatraz and the 1962 escape. He has studied it for more than 30 years. He first became interested in Alcatraz when he was 11 years old and took a tour of the island. The author and historian has written two books about it and he's working on a third. When we asked him about the deathbed confession and what Robert Checchi saw, he said, "I don't know what he saw. I don't know if in fact the boat that he saw was involved in the escape but I don't believe he's lying. He was a beat cop. He was a professional witness. He knew something didn't look right."

Now, all these years later, the deathbed confession suggests what Checchi saw could have been the boat that was there to help the convicts escape. Retired now, Checchi says he believes the men who escaped from Alcatraz were on that boat.

Esslinger says another interesting part of the deathbed confession is what happened after the men on the boat supposedly helped the three convicts out of the water and escape to freedom.

The confession suggests the men on the boat took the escapees all the way to a place near Seattle in the boat. And it wasn't long after the escape that the accomplices betrayed the Anglins and Frank Morris.

The dying man told his nurse, according to the confession, he helped murder the convicts and bury their bodies near a highway.

Esslinger has been out to the area on a search for the bodies with a former federal investigator. They did not find the bodies but they have not given up completely on the deathbed confession.

"There's still elements of the deathbed confession we still look at and I wonder if some of it could be true or not. I don't know. Anything is possible and it's just one more layer to this big mystery."

His next book is about Whitey Bulger, the Boston mob boss who served time at Alcatraz. Bulger spent more than 16 years on the run before he was finally caught and tried and convicted. Esslinger says Bulger had advised the Anglin brothers and Frank Morris that if they ever escaped they would have to cut all ties with their families and friends to remain free. If those three convicted bank robbers didn't drown in the bay in 1962, and if they weren't murdered by accomplices, one of whom gave the deathbed confession, they might have taken Bulger's advice.

Esslinger calls the 1962 escape from Alcatraz, "One of the greatest mysteries of the 20th Century."

Deputy U.S. Marshal Michael Dyke said sometimes the case can be frustrating, "There's no closure. There's no way to say what really happened."

Click here to read the FBI files on the 1962 escape from Alcatraz.

Click here to view the National Park Service photo gallery on the history of Alcatraz.