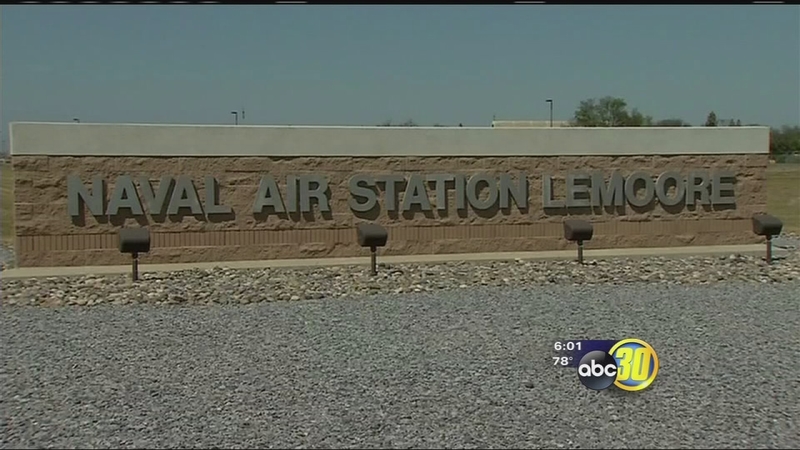 LEMOORE, Calif. (KFSN) -- There is new information about what happened at Naval Air Station Lemoore last spring, when a Jeep made its way on base and crashed with a parked F-18 jet, killing two people inside.

Documents released to Action News reveal little about how the vehicle made its way onto the base, but it does expose a communication breakdown between the California Highway Patrol and the base before the crash.

Action News obtained about fifty pages of Navy documents, released under the Freedom of Information Act. Much of the information has been redacted, but what is left shows a lack of communication between the CHP and the base, both before and after the Jeep got through the entry control point.

The driver of the Jeep, 29-year-old Anthony Castillo and his passenger, 36-year-old Melissa Miller had been speeding away from a CHP officer, after being pulled over near Highway 41 and Jackson Avenue in Lemoore at around 11:38 p.m.

As they made their way closer to NAS Lemoore, new documents reveal CHP dispatch tried calling the base three times, but that number was associated with a base building that was demolished ten years ago. CHP dispatch finally reached an air operations duty officer, who was notified of the pursuit at around 11:45 p.m., around the same time the Jeep somehow made its way past the entry control point on the operations side of the base.

"While there were a number of human factors that contributed to this incident, the most significant was the failure of timely communications between CHP and NAS Lemoore/NRSW dispatchers. The incident would likely have ended at the ECP had NSF personnel been aware of the ongoing CHP pursuit prior to the vehicle arriving at the ECP..."

The Jeep drove on base for about 17 minutes, before crashing into a parked F-18 jet, killing Miller. Castillo died later at a hospital.

Navy investigation documents show the CHP helicopter with an infrared camera was the only unit to have eyes on the jeep while it was inside base gates. It eventually landed on base to take Castillo into custody.
The documents go on to say, "A lack of direct communications between the CHP helicopter and the NASL naval security forces (NSF), combined with the lack of CHP's familiarity with the layout and nomenclature of NASL operations side, prevented an effective coordination of pursuit by the CHP and NASL NSF patrol units."

The documents say the incident "exposed vulnerabilities" and was "a valuable wake-up call" but was not an act of terrorism, but rather an "unfortunate event" that resulted in two deaths.

The documents detail steps NAS Lemoore has taken to review and train after the incident occurred, and also calls for all Navy installations and dispatch centers to update contact numbers for local law enforcement and public safety agencies and verify them throughout the year.

The documents also reiterate what officials said this spring about how the two died. The Jeep hit the horizontal stabilizer of the F-18 jet, and the stabilizer passed through the windshield.

CHP Hanford Spokesman John Tyler said he reviewed the documents and that they are accurate. He says following the incident in March, CHP and allied agencies were given the correct phone numbers to call the base at any time of day. Tyler says those phone numbers will be tested on a quarterly basis to ensure they are correct. The CHP and base personnel have also conducted drills and practical exercises together, and Tyler says Navy personnel will attend training days for CHP dispatchers. He says the dialogue between the base and the CHP hasn't stopped, before or after the incident.

See below for a response from NAS Lemoore Commanding Officer Captain David James:

"As the Commanding Officer, my number one priority is the security of our installation. Even before assuming command, many of the recommendations from the investigation have already been implemented. However, it does not stop there. This installation will continue to place Force Protection at the forefront and participate in training exercises that further enhance and solidify our protective posture. In addition, we will not wait for real-world occurrences to identify areas of improvement as we are an installation that is continuously assessing its security measures and proactively safeguarding against any threat. Furthermore, our collaboration with, and mutual support to and from, local law enforcement is second to none. Ultimately, Force Protection is everyone's responsibility; if you see something, say something."
Related topics:
lemoorekings countynaval air station lemooreinvestigation
Copyright © 2021 KFSN-TV. All Rights Reserved.
KINGS COUNTY
Kings County hopes for boost in COVID vaccinations
COVID vaccine hesitancy: A roadblock to herd immunity?
Johnson & Johnson vaccine arriving in Kings Co. next week
Kings Co. Day Reporting Center to be turned into COVID vaccination site
TOP STORIES
Central CA businesses hope for revival as state finally reopens
Man crashes into police car on Tule Reservation, deputies say
Suspect in custody after standoff in Kings County
Newsom says vaccinated CA workers won't have to wear masks after June 17
Historic heat wave could cancel some Valley events
Fresno Co. anti-marijuana operation leads to 37 arrests
Local farmers seeing decreased water supply due to drought
Show More
What to expect from CA's reopening tomorrow
Merced police looking for murder suspect
Disneyland dropping mask policy for fully vaccinated guests starting June 15
Temperatures expected to reach 111° in Central CA this week
Man shot and killed in Parlier, 2nd homicide in 24 hours
More TOP STORIES News