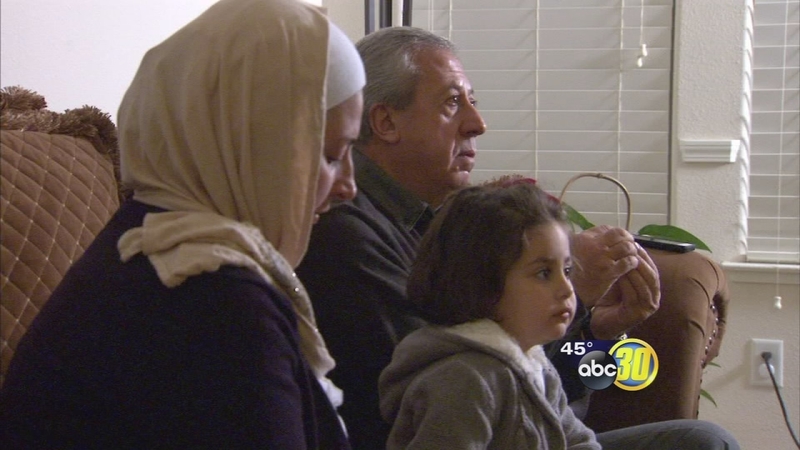 FRESNO, Calif. (KFSN) -- Here in the Valley, many people are voicing their concerns about refugees moving to the area.

Action News spoke with a family of three who escaped from Syria. They ended up here in Fresno out of fear for their lives.

Little Malek is just four-years-old. She's going to a Fresno school. She's also a Syrian refugee. In Arabic, her father tells why they're here.

"I have lost all hope. Because there is no home. There is just war," said Malek's father Saeed.

With just the clothes on their backs, Malek, and her family escaped from war-torn Syria. They arrived three years ago, after her father says he was attacked by militants. He was a successful businessman and his wife -- a lawyer. Now they both don't have jobs and depend on their American family for help. "It's hard on me when people feel bad for us. Because at a time I was a person of wealth in my country and I would help others. Now people are offering their sympathies to me," said Saeed.

Their story is no different than the thousands of refugees fleeing from Syria. It's why the president of Granville Homes Darius Assemi, said he's using his own money to bring other refugees here. "Should we do checks? Yes, we should do checks. But this is the biggest humanitarian disaster in our life. and as the richest nation in the country we have a moral obligation to the citizens of this earth," said Assemi.

Saeed hardly has money to help his family. So telling his story is how he's trying to help. When the three of them arrived in the states they were given a temporary visa. And applied for refugee status. "I was interviewed by two officers from immigration about my background and history. He said they will tell me the results in two weeks," said Saeed.

It's been two years since Saeed and his family were interviewed. They've been told by immigration officials they're still under investigation. They don't yet have refugee status and his fear is they could be told to leave.

"I don't know where to go. I have no home to go back to because war means death. And I am fearing that scenario," said Saeed.

Until that day comes, he is just happy Malek goes to an American school. And lives in peace, for now.

We also spoke with local congressmen to get their take on the refugee crisis. Representative Jim Costa said he wants to be ensured that a strict vetting process will be in place to make sure terrorists don't disguise themselves as refugees. "It is a real humanitarian problem. But I think my first responsibility is to ensure that I protect and defend -- as I took my oath -- American citizens from all enemies foreign and domestic," said Rep. Costa.

Senator Andy Vidak told us "At a minimum, we must temporarily close our borders to Syrian refugees. Our first priority is protecting America," he said.