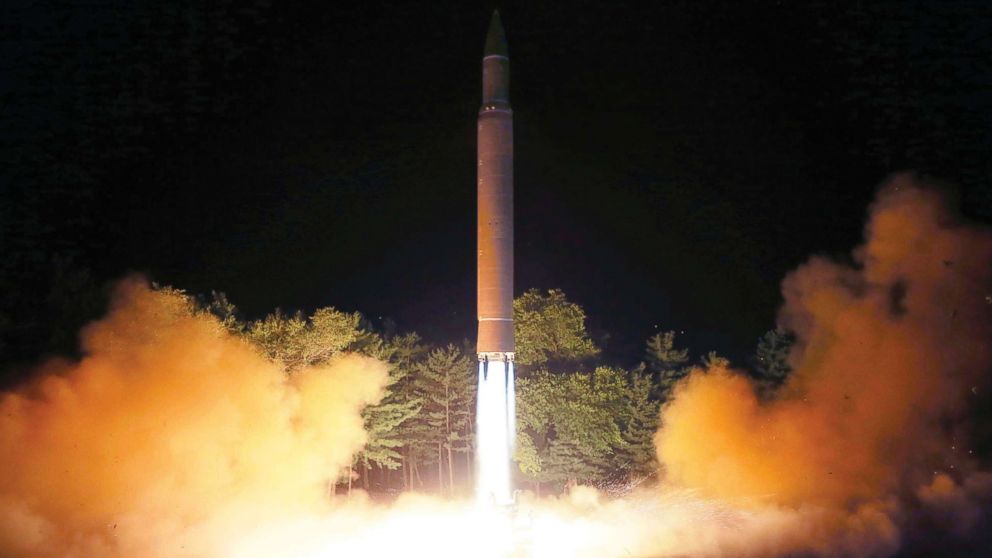 The rogue nation's statement follows President Donald Trump's comments hours before, during which he warned North Korea that any threats to the U.S. "will be met with fire and fury like the world has never seen"

The North Korean army made the announcement in a statement distributed by its state-run news agency that the military is reviewing a plan to create an "enveloping fire" in areas around the U.S. territory, located in the Pacific Ocean about 2,100 miles from North Korea.

The statement said the decision to review such plans is in response to a recent ICBM test.

There are 7,000 US military personnel on Guam.

The main base on the island is Andersen Air Force Base that is home to long-range B-1 bombers that have recently been used for "show of force" missions to South Korea following North Korea's two ICBM missile launches.

Andersen Air Force Base is just one of the installations on Guam; Naval Base Guam also has a significant number of personnel.

Guam's offices of Guam Homeland Security and Civil Defense said in a statement that its threat level remained unchanged, and that it will "continue to monitor the recent events surrounding North Korea and their threatening actions."

Homeland Security adviser George Charfauros said in a statement, "As of this morning, we have not changed our stance in confidence that the U.S. Department of Defense is monitoring this situation very closely and is maintaining a condition of readiness, daily. We will continue to keep the public updated on any changes or requests for action. For now, we advise the community to remain calm, remember that there are defenses in place for threats such as North Korea and to continue to remain prepared for all hazards."

Still, the speaker of the Guam Legislature told The Associated Press he hopes the island can defend itself in the event of a North Korean attack.

"We're just praying that the United States and the ... defense system we have here is sufficient enough to protect us," Benjamin J. Cruz said.

Cruz said the threat is "very disconcerting," adding, "It forces us to pause and to say a prayer for the safety of our people."

Guam's governor, Eddie Calvo, released a two-minute video message to the island's residents, in which he said, "I want to ensure that we are prepared for any eventuality."