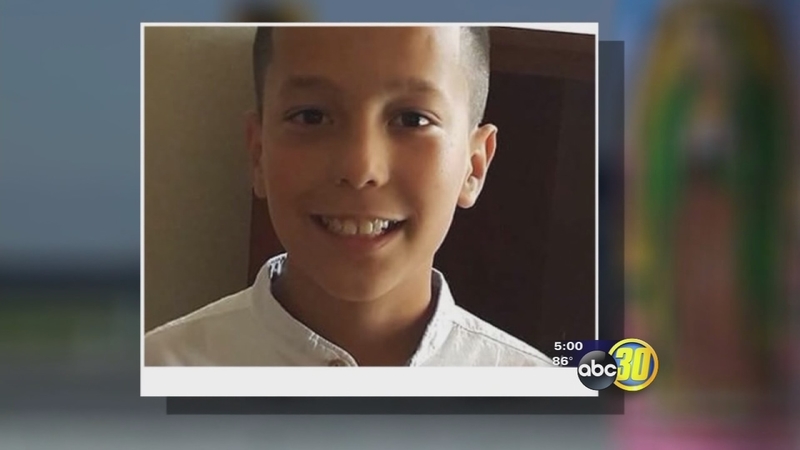 LE GRAND, Calif. (KFSN) -- A cross made of candles marks the spot where an 11-year-old boy from Le Grand was killed in a hit-and-run collision on Monday.

It happened in Modesto near the intersection of Carpenter Road and Hatch. The California Highway Patrol said a Dodge Challenger driven by Traves Krause was headed north when it collided with a Toyota Camry at the intersection and fled the scene.

The driver of the Toyota Camry sustained minor injuries, but a 30-year-old and nine-year-old in the car sustained major injuries.

An 11-year-old, identified at Yeidkol Rangel, also sustained major injuries and was later pronounced dead at a Modesto Hospital.

CHP said Krause was under the influence

Officer Tom Olsen, of the CHP, said, "The handling officers and investigating officer observed signs of being under the influence of a certain substance, and did a drug recognition evaluation on that individual."

Rangel was a sixth grader at Le Grand Elementary, the superintendent of the elementary school district said they got the tragic news Tuesday morning.

"We know all of our students and it just hurts when it's one of your own," said Rosina Hurtado, Le Grand Union Elementary School District Superintendent.

Hurtado said parents were immediately told what happened and faculty members also talked to friends of Rangel. One of those friends was a sixth grader named Julian Urquizo.

"Once we heard he passed away we all started to cry, and it was like our hearts started to break."

The students and faculty are now rallying together to help raise money for the family by fundraising both online and on campus. The kids plan to sell snacks and T-shirts remembering Rangel and his love for the game of soccer.

"He was an athlete, he liked to play soccer, he used to run fast," said Urquizo.

The school currently has grief counselors to help the students cope with the loss of the sixth grader who they say was taken away too soon.
Related topics:
le grandmodestomodestomerced countyschoolchild killed
Copyright © 2021 KFSN-TV. All Rights Reserved.
MERCED COUNTY