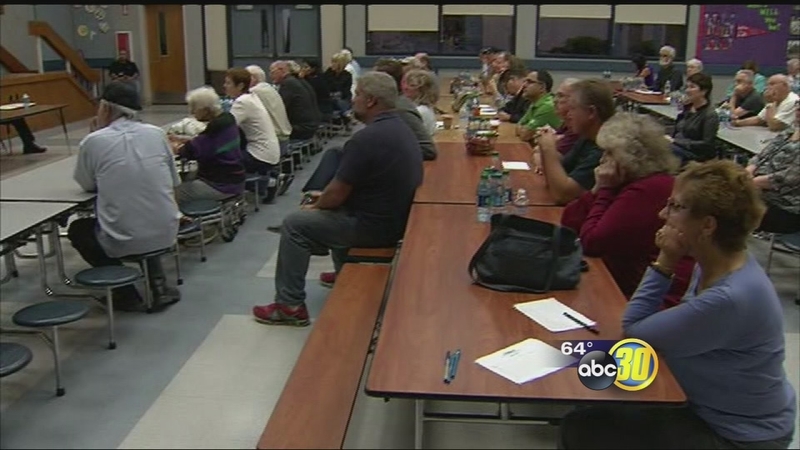 At just 15, Chris Pointer of northwest Fresno isn't old enough to drive. So he walks to his friends house most weekends. Like he did on a path near Veterans Boulevard and Wathen Avenue last Saturday. "I wasn't wearing nice shoes or brand clothes. I was just walking like a typical kid."

Before he could even make it down the block he was surrounded by three suspects. "They came up to us and said give me all your stuff or we'll shoot you," stated Pointer. His friend got away but the thieves stripped Pointer of his valuables.

The very real fear of being robbed or burglarized was discussed at a community meeting Wednesday. "Everybody in my neighborhood has been broken into in their home or a home invasion or somebody breaking into their car. I mean it's crazy," said Michael Espinosa, Northwest Fresno resident.

Chief Jerry Dyer says he knows there's a problem. Just in Northwest Fresno car burglaries are up 35-percent from last year. "What we have seen is more individuals that are addicted to drugs that are stealing in order to support their habit." Dyer believes it's because of proposition 47, a law that reduced sentences for many crimes, to combat overcrowding in jails. "There are a lot more people that are out on our streets that are not receiving treatment or they're not incarcerated," said Dyer.

Dyer says they're increasing patrols and working to clean up these neighborhoods, but Pointer says he won't be walking anywhere near here anymore. "Honestly I'm kind of scared still. Just thinking about it that sooner or later they might come back."
Related topics:
fresno northwestcrimeburglaryrobberyfresnoneighborhood
Copyright © 2021 KFSN-TV. All Rights Reserved.
FRESNO