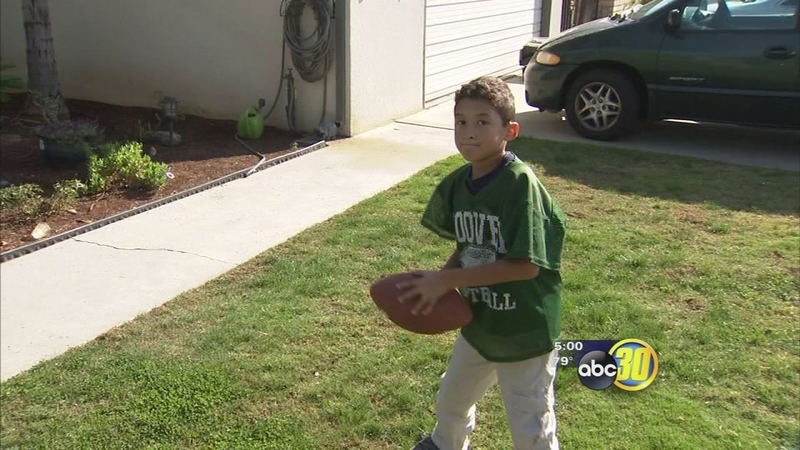 FRESNO, Calif. (KFSN) -- Parents in northeast Fresno are upset that a former teacher's aid, who's facing charges for having sex with an underage student, is still interacting with children on a youth football team. The parents are also unhappy that after they complained to the coach about it, their son was cut from the league's All-Star team.

Fresno Unified is not associated with the youth football league but the teams do play here.

Six-year-old Christian didn't know why he was abruptly cut from his Pee Wee football league Wednesday. He was all dressed in his uniform after being picked for the league's All-Star team when 20 minutes before practice, his mother Julia Castro got a phone call from the coach.

"They tell me not to come, that they decided to cut Christian and the reason was because they downsized the team and I didn't really like their coaching anyway," Castro said.

Castro, though, believes it was for another reason. Just over a month ago, Castro saw Action News' story about former Hoover High School teacher's aid Theresa Marie Ramirez getting arrested for statutory rape and several other felonies after prosecutors said she was having sex with an underage, special needs student.

Castro said Ramirez is on the field at Hoover High School as part of the West Coast Football Association's youth league.

"She's on the field with our kids," she said. "She's attending injuries with our kids like nothing happened."

This upset Castro. At first, she didn't say anything but then, last Saturday, she couldn't hold back.
"She was helping my son get water and she had her hand on his shoulder and it really bothered me because this is my kid," she recalled.

Castro went down to the field and talked to the coach's wife about Ramirez's interaction with the children being inappropriate but said she was rudely brushed off and laughed at. Then just days later, Christian was the only child cut from the team. Now his parents think the coaches are playing politics with their 6-year-old.

"This woman, who has been arrested, charged with these really serious felonies, is out there with our children," Castro's husband Jesse said.

Julia said she's just upset that the season ended on a sour note, especially since he only joined as a way to distract him from his aunt's recent passing from cancer.

"I was hoping he could, you know, have this outlet to play football and instead they cut him because I said something," Julia said.

The parents are also unhappy that after they complained to the coach about it, their son was cut from the league's All-Star team.

The head coach of the league, Steve Stevens, said Christian was not kicked off the team, but that he was not allowed to play on the league's Allstar team because the players chosen were too big. Stevens said he was concerned about Christian's safety and tried telling his mom, but she was too upset to hear him out.

"Her son was not kicked off the team he finished the season with the team. He should have not been selected as an all star player for safety reasons."

Stevens says the six year old's mother never came to him voicing concerns about Ramirez being out on the field as a parent helper. He also claims she wasn't given any restrictions to stay away from children and was never alone around a child.

West Coast Football Association said that Ramirez is not part of their staff and is a parent helper. They've instructed the coaches to no longer have her out on the field. Other parents also said they are upset over the situation but were too scared to talk on camera.
Related topics:
fresno northeastfresno
Copyright © 2021 KFSN-TV. All Rights Reserved.
RELATED
Fresno Unified teacher's aide accused of having sex with a special needs student
FRESNO
Valley companies look to hire, experience work shortage
George Lopez to bring comedy show to Fresno
Dozens help clean up at Camp Fresno
Bakery in River Park celebrates grand opening
TOP STORIES
Merced teacher back home after battle with COVID-19
Looking back at the ups and downs of COVID in Central CA
24-year-old man shot in southwest Fresno, police say
What changes throughout Central California as state reopens
CA has reopened, but not everyone can go maskless
Suspect involved in standoff in Kings County identified
19-year-old arrested on arson charges for NW Fresno fires
Show More
What to expect from CA's reopening today
Newsom picks 10 winners of $15M to celebrate reopening
1 killed in shooting on Hwy 99 near Merced
Valley doctors discuss California's reopening
Valley travel industry shows signs of rebound as CA reopens
More TOP STORIES News