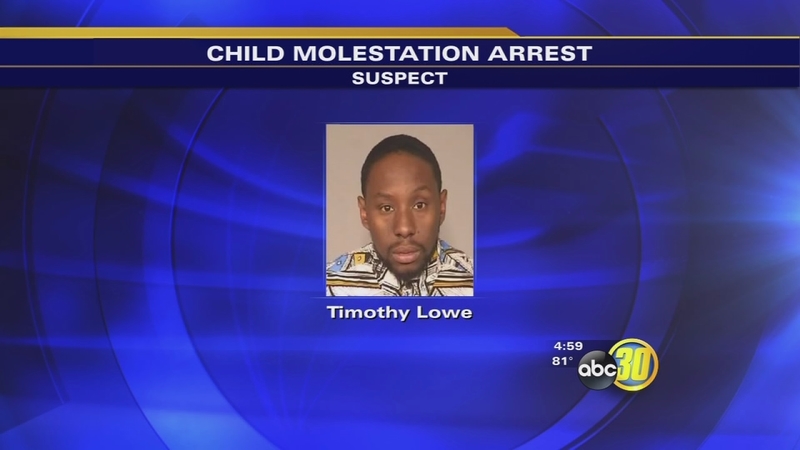 FRESNO, Calif. (KFSN) -- A Fresno man is under arrest for several felony counts involving sex crimes with a child. Police arrested Timothy Lowe, 29, early Tuesday morning after a call was taken from a woman who officers say is the young victim's mother.

Officers say the allegations are very disturbing, and the victim was very specific about what happened. The child even told detectives the crimes made him cry inside, but he didn't cry out loud for fear he would get in trouble by the suspect.

Neighbors say Lowe seemed to be a wonderful person who loved children. His upstairs Fresno apartment is where police say sex crimes were repeatedly occurring. Detectives got a call Monday about the alleged abuse and immediately followed up.

"The child has been having anger issues at school, suspensions and things like that, attacking other kids. And I think the child's mother just sat him down to talk to him, you know, what's your problem, what's going on, and then the child told the mother," said Lt. Joe Gomez of the Fresno Police Department.

Late Tuesday, Pastor Paul Binion showed up at the Fresno County Jail to visit Lowe. The suspect is a member of the Westside Church of God, and Binion wanted to hear what's going on straight from the source.

"I've heard a lot of things and of course rumor control is flying, and so this is my first opportunity to come and see what's happening for myself," said Binion. "But I want to go on the record that we love Tim, he's a son, he's a part of our family, and we're gonna stand with him every step of the way."

Investigators say the child was very descriptive in telling officers what has been going on beginning late last year.

"I can tell you generally what the child told us is that they started around Thanksgiving and they've gone on every week, three times a week," said Gomez.

At the apartment complex where Lowe has lived for several years, neighbors said he usually kept to himself.

"I didn't think that a gentleman like that could do something to a kid. It's surprising, especially when you live below the person," one neighbor said.

Detectives took an iPad, iPhone and laptop computer during a search of Lowe's home. Each will be analyzed to see if any other charges are warranted.