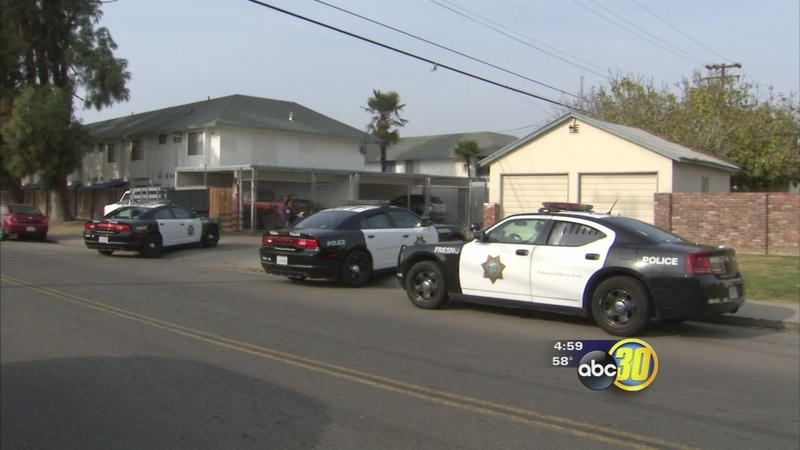 FRESNO, Calif. (KFSN) -- The numbers are downright frightening-- 33 shootings in the last 28 days; 23 people hit. A big chunk of them have happened in Southwest Fresno and police have a plan of attack there.

A heavy police presence in Central Fresno Wednesday took aim at suspects in a possible driveby shooting. Officers questioned one guy while piecing together whether an SUV was the target of a shooting or the source of the gunfire.

Violent crime may be down in Fresno in 2015, but this is a problem that stands out. "The crime that worries me the most is the shootings that are occurring in our city," said Jerry Dyer, Fresno Police Chief.

At the Fresno Fairgrounds, and in a Southwest Fresno neighborhood, police officers have been the mark for shooters twice in the last few days. But investigators map out the crimes, and they know the common thread running through the cases isn't police targets.

"We are fed up as a city with the gang violence that is occurring by them," said Dyer.

Because gangs are so frequently connected to the shootings Dyer said witnesses are often reluctant to help solve the crimes for fear of retaliation or because their friends might get in trouble. Dyer also said his department doesn't always have the resources it needs to calm the storm.

A focus on Southeast Fresno brought the number of shootings way down over the last two months. Now Southwest is where the trouble is, and police are looking for the biggest troublemakers. "We will be targeting those individuals and removing them from the neighborhoods. We're going to find a reason to arrest them," said Dyer.