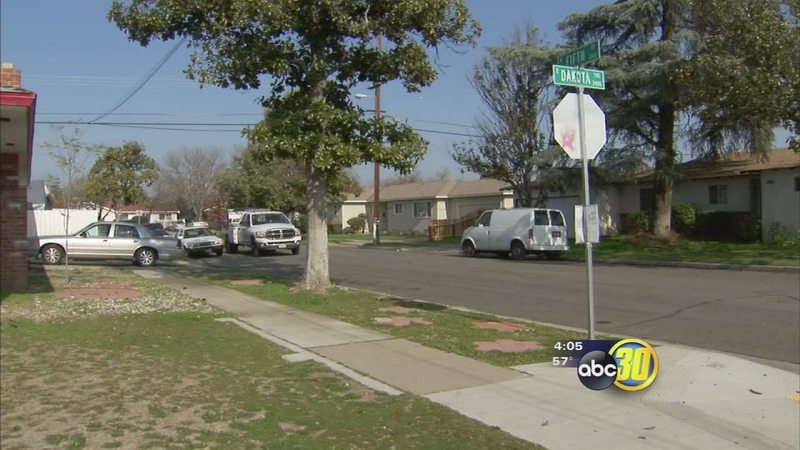 FRESNO, Calif. (KFSN) -- Fresno police are looking for a purse snatching robber who attacked a 60-year-old woman in broad daylight on a busy street.

The robber was bicycling down Dakota at about 9:00 a.m. when he spotted the victim walking towards her car with a purse in one hand and a 3-year-old in the other. The woman said there was a tug of war over the purse, but she eventually lost when he hit her with a big stick. The bruise on her leg is a dark reminder of the violent attack on Soila Cruz-Aceves. But the 60-year-old tells Action News she doesn't need any help to remember what happened, it'll keep her crying for quite some time.

Aceves speaks only Spanish, but she said the robber spoke some as well. As he grabbed her purse, he told her he'd kill her if she didn't let go, but she held on until he hit her. He got the purse and disappeared around the corner with more than $600 in cash she was taking to the bank, as well as social security cards for herself and two of her kids. Her family went to her side as soon as they got word of the attack. "The money and everything is whatever, but you know, as long as she's all right, that's the important thing for us and the family," said Esteban Brambila, son-in-law.

A 3-year-old grandchild watched the entire crime play out and so did a woman who was parked across the street. Police said the woman described the suspect as an African-American man between 23 and 25 years old. He was about 5'6" with a medium build, and he was wearing a green sweater with a black hoody underneath it and black pants. Neighbors are also looking out for his black mountain bike. "It's kind of crazy because I thought this street was kind of safe and everything, like, it doesn't happen a lot, but today it happened. I hope they get him so it won't happen again, you know," said Brambila.

The robbery wasn't the only crime in this neighborhood Tuesday either. As we talked to neighbors, one of them told me someone broke into her car this morning, but she doesn't think anything was stolen.
Related topics:
fresno centralelderly womanpurse snatchingrobberyfresnowoman assaultedarmed robbery
Copyright © 2021 KFSN-TV. All Rights Reserved.
FRESNO