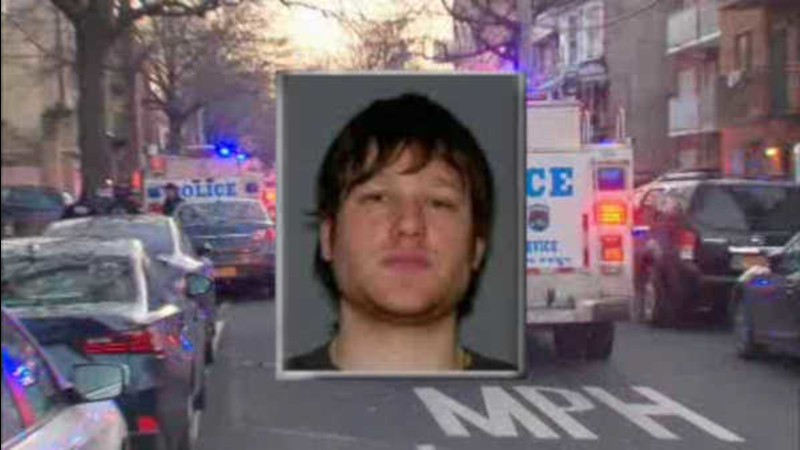 ASTORIA, Queens -- With officers scrambling, and responding with weapons drawn, it was a dramatic end to a massive manhunt in Astoria, Queens for a man who was wanted in three violent attacks.

Police say 23-year-old James Patrick Dillon threw an accelerant he had in a beer bottle at an officer during his arrest. Two officers suffered facial and hand injuries from the chemical burns. They are conscious and speaking, and are expected to be okay.

Lucy Yang has more from Astoria.

Police spent most of Sunday evening searching for Dillon, who was wanted in connection with two violent stabbings, and setting a man on fire inside of a liquor store. Below is a timeline of events as they happened. All times are approximate.

3:09 p.m.: Dillon enters a liquor store on 38-18 Astoria Boulevard, and gets into an argument with a 61-year-old man inside. The 55-year-old owner of the store, George Patouhas tries to break out the fight and kicks Dillon out. Dillon later comes back, fatally stabbing Patouhas in the neck. He then sprays an accelerant on the 61-year-old, and lights him on fire. The victim was removed to Cornell Presbyterian Hospital in Manhattan where he currently listed in stable condition.

5:11 p.m.: Police receive a 911 call of burglary in progress at 30-65 42nd St. in Astoria. The complainant called 911, telling dispatchers that a white male attempted to break into her apartment and was fleeing on fire escape.

There has been a police involved shooting R/O 25-38 36 St @NYPD114Pct. Unk sub thrown in face of MOS Knife recovered pic.twitter.com/f66q97V3FI

5:40 p.m.: Two officers went searching on foot near Dillon's home on 36th Street. Officers then confronted Dillon, and demanded he drop his knife and a bottle of accelerant he was carrying inside of a Corona beer bottle. Dillon refused, and then sprayed the two officers with the liquid, burning their hands and face.

The officers then discharged their weapons, shooting the suspect. Both the inspector and the lieutenant from the Critical Response Command were transported to Cornell Presbyterian Hospital in stable condition. Seven shots in total were fired by the officers.

"It's crazy. I can't believe it, it's beyond me," said eyewitness Cristina Squicciarini.

The suspect was transported to Elmhurst General Hospital in critical condition. Police are not saying where he was struck.

Officers say they believe there was a psychological problem with Dillon, and his family says he had not been taking medication recently.
Related topics:
astorianew york citystabbing
Copyright © 2021 WABC-TV. All Rights Reserved.
More Videos
From CNN Newsource affiliates
TOP STORIES