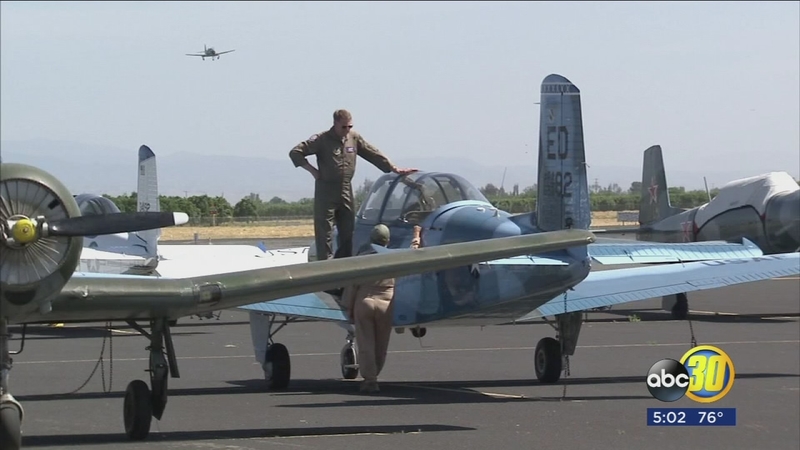 As pilots prepared to take off and land at the Porterville Municipal Airport, what happened to one of their own raced across the runway with them.

"It's a brotherhood," one pilot said. "And we're obviously sad to hear of the passing of one of the pilots."

Gutierrez was traveling from Phoenix to the Central Valley when his single-engine, older model plane went down in Kern County. He was less than a hundred miles away from his destination."

"We were expecting that particular aircraft to show up for this event for this clinic and when we heard the news we put two and two together," pilot Gal Lipaz said.

Lipaz says he and Gutierrez not only flew the same aircraft but were both participating in basic military formation training at an event called All Red Star.

It is here that pilots learn safe maneuvering techniques while also having a little fun.

"He has been flying with us for many years," he said. "Very likable guy, and, you know, it's very sad."

It's especially tragic since he was not able to park his aircraft on the tarmac and reconnect with the guys on his annual trip. So, a group of men held a moment of silence for Gutierrez Thursday night.

"We will miss him," Lipaz said. "We feel for him and mostly we feel for the family."

Now the FAA and the NTSB are both investigating, it is unknown at this time what caused the plane to crash. But the FAA says any plane, especially ones like these that are restored, has to get an airworthiness certificate before going up into the air.
Related topics:
portervilletulare countyplane crash
Copyright © 2021 KFSN-TV. All Rights Reserved.
TULARE COUNTY
1 killed in crash near Ivanhoe
5 arrested in connection to Tulare Co. crime spree that turned deadly
2 men killed after car hits power pole in Tulare County
3-year-old attacked by dog, hospitalized in Tulare County
TOP STORIES
Fresno Co. Social Services looks for long-term plan to house children
California now only state at 'moderate' COVID transmission level
New state law, local agencies cracking down on dangerous driving
Man killed in motorcycle crash in central Fresno, CHP says
Doctors concerned about rising number of Valley Fever cases
Recovery program scrambles after fire burns historic Fresno home
Report shows 2021 is California's driest year since 1924
Show More
Tulare grandmother back home after 10-month battle with COVID
Statewide school walkout planned to protest vaccine mandates
New PG&E rate varies based on time of energy usage
Colin Powell dead at 84 from COVID-19 complications
Empowering LatinX communities to get vaccinated through campaign
More TOP STORIES News