KFSN
By Sontaya Rose
FRESNO, Calif. (KFSN) -- A young, pregnant woman is shot in the head in what Fresno County Sheriff's officials say appears to be a case of road rage.

The 18-year-old woman was shot on Saturday around 10:30pm at Floral and Englehart in Reedley. She was a passenger in an SUV driven by her husband.

Investigators say the victim was shot in the left eye. The bullet exited the back of her head. She is three months pregnant. Deputies say this appears to be a random and stunning case of road rage.

Fresno County Sheriff's deputies surrounded the area near the Fresno and Tulare County line Sunday night -- looking for any evidence that may lead investigators to the SUV or suspects who took road rage to a whole new level.

"To have road rage transpire into something this big, we don't see it that often," said Tony Botti with the Fresno County Sheriff's Office. "We do know that tempers flare on the road though and people act in different ways."

A dispatch recording captured the chaotic and terrifying moments as an officer relays what was happening at the scene: "72 I got the vehicle right here I'm going to be following them to the hospital - stating his wife is dead."

Sheriff's officials say the couple was northbound on Engelhard coming back from a shopping trip in Dinuba.

Botti explained, "Came upon this slow moving car. Passed it and moments later, that same car did some sort of a retaliation and shot at them."

Kathy Kanawyer lives right by the crime scene and noticed two cars speeding past her home about the time the shooting took place.

Kanawyer added, "We did see two vehicles race past here and then as we were leaving the driveway, maybe 5 minutes later cops were around, they came and talked to us all, asked if we'd seen anything."

The suspect's car is described as a light colored SUV, possibly a Chevy Tahoe, Suburban or GMC Yukon. The area is remote, and so far, detectives have not found any surveillance video so they are relying solely on the frantic account of the victim's husband.

A Reedley police officer was first to show up at the scene and escort the couple to Adventist hospital in Reedley. The victim was then flown to Fresno for more specialized trauma care. 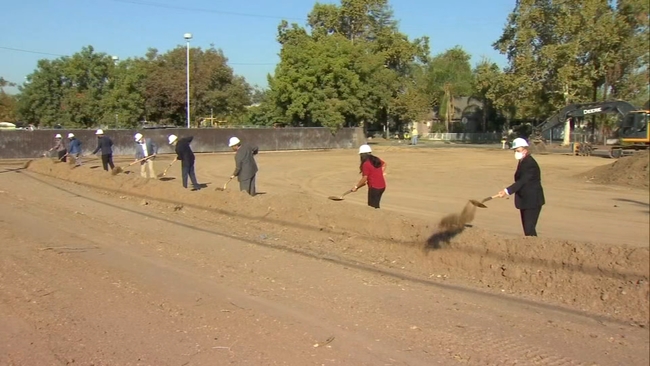