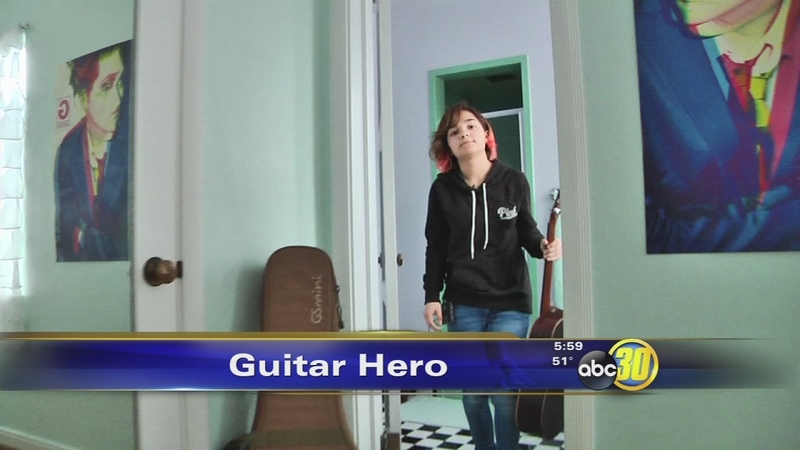 FRESNO, Calif. (KFSN) -- A 15-year-old girl was home alone Wednesday morning when she caught a burglar breaking in through a doggie door.

"I noticed that this guy kind of stumbled out and kind of was looking around over there." Bella Morales said, "he was really tall and so I was sort like, 'ooh...ok.'" The man was on the opposite side of the house and he didn't notice Bella standing in the hallway so she closed the door, ran to her room and picked up a guitar for protection.

"I kind of slid it out and grabbed it without being heard." It was a stealth move. She locked herself in the bathroom and called her mom, Christine Netzley-Morales for help.

"I was pretty nervous, I didn't really want to hit him or anything but I wanted to at least have a plan for if he did come in," Bella said. Her mom Christine added, "I was losing it on the inside and she just seemed so calm and put together."

Christine was at work and says she felt helpless. She wanted to stay on the phone with her daughter so she grabbed a friend's cell phone and called police. "They told me they were gonna kick the door down and I was like, 'yeah, whatever, do whatever you need to', then they said they saw him," Christine said.

By this time, police say the suspect, Juan Banda was in the backyard trying to jump a fence with a gym back full of stolen Christmas gifts from the home. Officer sent in a K9 to take Banda down and he was bit on the shoulder.

Bella said, "I did hear him run...so, he wasn't quiet about it." Police say Banda is an ex-felon with a history of burglaries. His injuries are minor and he has been booked into the Fresno County Jail.