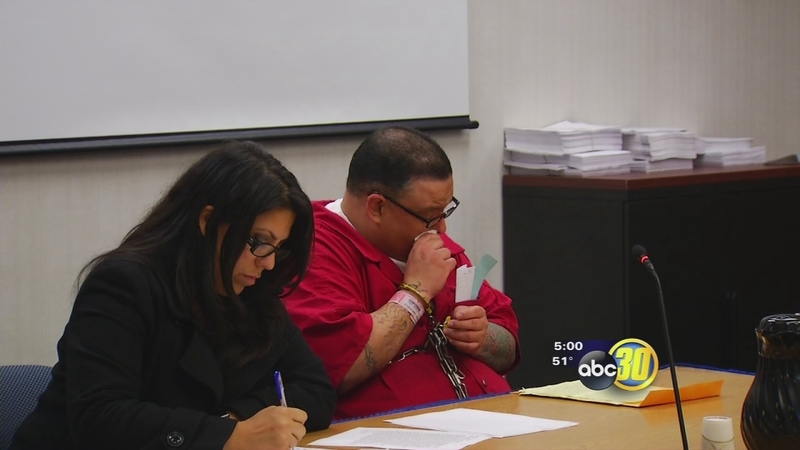 FRESNO, Calif. (KFSN) -- Six years after he drove drunk and killed a man Cesar Gonzalez Moreno apologized for his bad choices on the same day a judge sentenced him to life in prison for murder.

Moreno said he's thought about this day ever since Thanksgiving 2010 when he drove with a .30 blood alcohol content and killed a man. On Wednesday, he made a promise about his future, and asked the victim's family for something in return.

As paramedics treated Moreno on the side of Highway 180 on Thanksgiving Day 2010, he was facing his third DUI arrest. He'd rammed his El Camino so hard into an SUV, it knocked the driver straight through the windshield, even though she was wearing a seat belt.

Petra Silva survived the crash, but her husband, Eugenio Fuentes Ramirez, did not.

"Mrs. Petra Silva, today I ask you for your forgiveness, forgiveness for all the pain, the anguish and loss my actions caused you and your family," Moreno said to his surviving victim.

Moreno said his remorse is extreme. He said childhood abuse may have driven him to alcoholism and even after treatment, he relapsed. Police say he crashed into another car a few minutes before the deadly rear-end collision. He knows now he deserves to go to prison.

"For the first time in my life, I'm at peace with God and myself," Moreno said. "I'm no longer tormented by my past, no longer living in a bottle."

Moreno's attorneys, Amy Guerra and Serita Rios, say he was a successful chef and a frequent volunteer, even serving food to victims of Hurricane Katrina.

Judge Jonathan Conklin acknowledged Moreno's remorse, but said he needed to send a message about the dangers of drunk driving. He sentenced Moreno to life in prison, with his first parole hearing after about 19 years.

Moreno promised to Ramirez in his thoughts forever and to do something to make his family proud of him from this point forward.