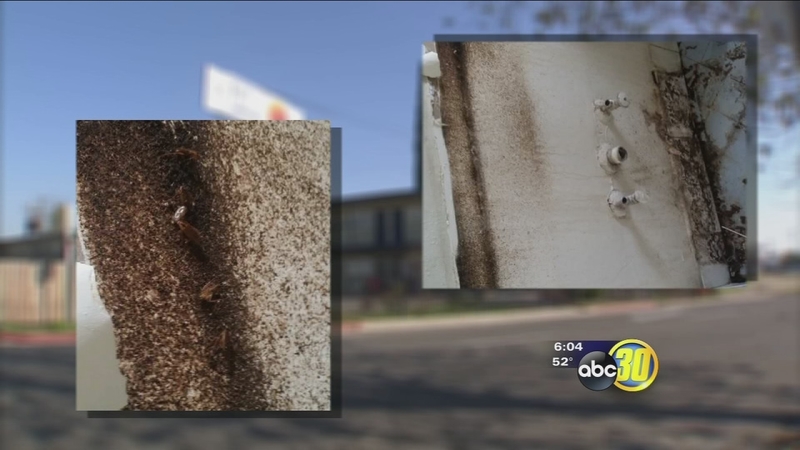 FRESNO, Calif. (KFSN) -- Advocates for Fresno's poorest tenants watched helplessly as a 68-year-old woman's home filled with water just before Christmas. Like many people before her who live in the Hotel California, she grabbed what she could and moved into another room.

"We already fixed. Only for room 23 needs to be fixed (sic)," said Dushyant Sharma, Landlord.

Sharma told us he got the permits he needs to make repairs, and he does everything he can for residents. A lot of them aren't convinced of his benevolence.

"All he does is just throw stuff up over it, cover it, and never fixes the leak," said Michael Baldwin, Hotel California tenant.

Baldwin took his complaints to the city of Fresno and forced some fixes in his own room. But he said Sharma's been watching him closely ever since. In fact, the landlord lurked just off to the side as we interviewed his tenants.

And some of them would only discuss their complaints in conspiratorial whispers.

"He cuts corners, especially with the mold. There's mold in every room, every room. We did the laundry room and two days later both my eyes shut (sic)," said James Nelson, Hotel California tenant.

The mold and the bugs are pretty easy to spot in some of the rooms and Live Again Fresno advocates are pushing Sharma to improve conditions for people paying $750 to $1,000 a month.

Live Again's Richard Burrell was there with his camera Wednesday when, for the third time in two days, paramedics picked up a resident for breathing problems

"He wants to trouble me to shut down my hotel. That's why he creates a problem every day," said Sharma.

Burrell said he is persistent because this a basic standard of living issue, and some residents say their health is at risk.

"It's ridiculous. It's really ridiculous. He's been getting away with this stuff for too long," said Baldwin.