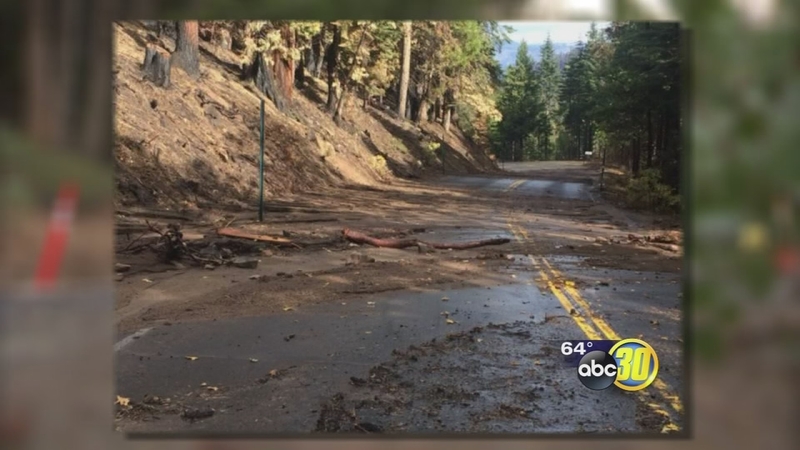 SQUAW VALLEY, Calif. (KFSN) -- A new threat in the mountains this winter after months of damage from the Rough Fire.

Official said mud and debris from the Rough Fire pose a threat as a likely wet winter approaches.

From roadway to river in just minutes. Video of the Sierra National Forest last week, shows a roadway swamped by debris from the Aspen Fire. That fire burned two years ago. So effects of the rough fire, Jerry Arredondo can't imagine.

"We've seen it where there's a lot of water but there's always something to hold the mud back, so we're going to see something we haven't seen before," said Jerry Arredondo of Squaw Valley.

Photos from forest officials show flooding on Highway-180 after recent storms. They expect the sight to be commonplace for at least one year. A worry for people like Arredondo who live and work in the area.

"Our concern is the areas that are completely burned out with nothing to hold the soil at all. If we get a super heavy rain like we have in the past...just concerned that all that mud is going to flow into the creeks and eventually into the Kings River," said Arredondo.

"If that happens and it blocks the Kings River, that water in the river could be diverted outside the kings river," said abc30 weather forecaster Reuben Contreras

The concern for erosion is a top priority for teams working to repair the damaged lands. But Contreras said there's potential for even greater damage. In Contreras' opinion, rain coming is not an if, but when.

"El Nino is happening now, We could actually double our rainfall for the El Nino year just in one season so we could easily get thirty inches of rainfall for this winter and early spring," said Contreras.