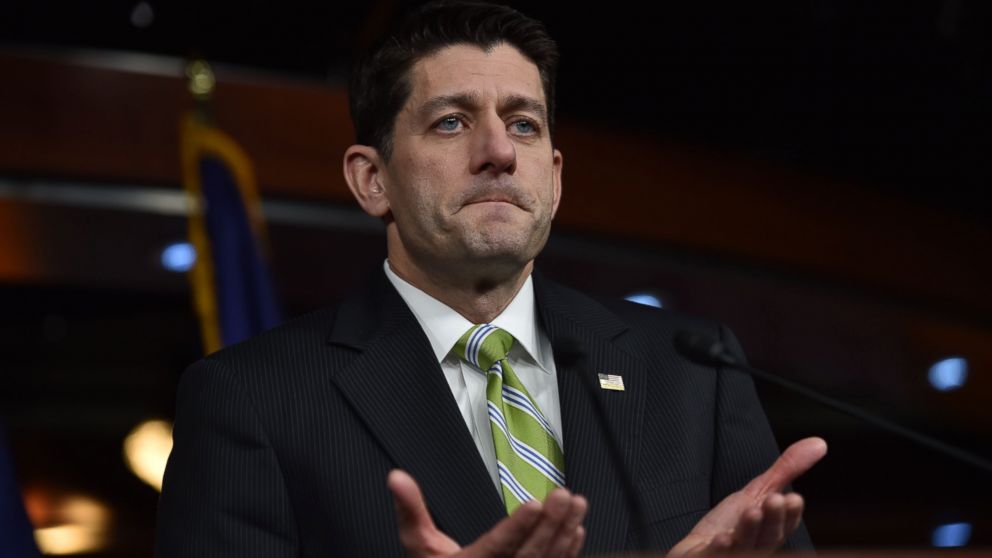 House Republican leaders decided to pull their Obamacare replacement bill at the last minute at the request of President Donald Trump -- capping a rocky series of weeks since the controversial measure was introduced and an order from the president for legislators to put their cards on the table today.

A GOP aide tells ABC News that Trump called Speaker of the House Paul Ryan at 3 p.m. to tell him to pull the bill. The next House votes are scheduled for Monday, so no further votes are expected in the House for the day or the week.

"We've got to do better and we will," Ryan said at a hastily arranged press conference this afternoon. "This is a setback no two ways about it," but GOP leadership is emerging from the day "motivated to step up our game and deliver our promises."

Ryan said they pulled the bill because they couldn't get enough "yes" votes for the bill to succeed on the floor. He said "I'm really proud of the bill we produced," but later in his speech called it a "fundamentally flawed" piece of legislation.

The Affordable Care Act, known as Obamacare, has been in effect since President Obama signed it in 2010. Republicans have vowed to get rid of the bill since then.

Trump blamed the failure on the Democrats, and said in a press conference that they will come to him when Obamacare "explodes."

"It's imploding and soon will explode and it's not going to be pretty," Trump said.

The vote would have come after House GOP leaders postponed a vote Thursday and the White House delivered a late-night ultimatum: to vote today or the president will move on to other agenda items.

The president has "left everything on the field when it comes to this bill," White House press secretary Sean Spicer said earlier today, adding that Ryan "has done everything he can" to collect votes but "at the end of the day, you can't force people to vote."

Spicer said the GOP leadership and the White House had continued to pick up "yes" votes throughout the day.

The White House insisted in recent days that there was no Plan B for the legislation and that the president was all in on the measure, which had been amended amid concerns from moderate and conservative Republicans.

It's a move right out of the president's own book, "The Art of the Deal."

Trump answered questions from reporters this morning in the Oval Office on what he'll do if the bill fails. "We'll have to see, see what happens," he said.

On whether he thought the bill was rushed, he replied, "no." He also stood by Ryan, R-Wis., saying "yes" when asked whether he should remain in his position as speaker of the House if the bill fails.

For Ryan and the Trump administration, all hands were on deck today. The speaker went to the White House shortly after noon to update the president, and Vice President Mike Pence canceled a trip to Arkansas today to stay in D.C.

At around 1 p.m., Pence went to the Capitol Hill Club to join the House Freedom Caucus, the conservative group of lawmakers who oppose the bill unless amendments are made.

This bill needed no less than 215 "yes" votes to pass the House, lowering the number from 216 because one Democrat would have been absent for the vote.

Trump this morning tweeted that "after seven horrible years of ObamaCare (skyrocketing premiums & deductibles, bad healthcare), this is finally your chance for a great plan!"

The president also this morning called out the House Freedom Caucus, suggesting that without the GOP bill, the women's health care and family-planning organization Planned Parenthood would not be subject to funding cuts.

At least 32 Republicans had said they would oppose the bill, according to ABC News' latest count. Because the GOP needs 215 votes for a simple majority to pass the bill in the House, it could afford to lose only 22 Republican votes to move the legislation.

Both Democrats and Republicans shared their thoughts on the bill in several animated floor speeches this morning.

"There are only two ways you can vote for this bill," Rep. Jim McGovern, D-Mass., said. "One is you don't know what's in the bill. Or two is you have to have a heart of stone. Because this bill is shameful."

Rep. Jodey Arrington, R-Texas, echoed the sentiments of many moderate Republicans hoping to capitalize on GOP power in Congress and the White House: "Now that we're given the opportunity to govern and keep our promises and to deliver results for the American people, we can't let perfect be the enemy of good."