AP
By MEG KINNARD
COLUMBIA, S.C. -- A deputy was fired Wednesday after video showed him flipping a teen backward out of her desk and tossing her across a classroom, with the sheriff saying the officer did not follow proper procedures and training.

The student was being disruptive and refused to leave the classroom despite being told by a teacher and administrator to do so, Lott said, and that's when Fields was brought in Monday to remove her from the class. She again refused, and Fields told her she was under arrest, Lott said.

She continued to refuse, and at that point the video shows the deputy flipping the teen backward and then throwing her across the room. At that point, Lott said, Fields did not use proper procedure. 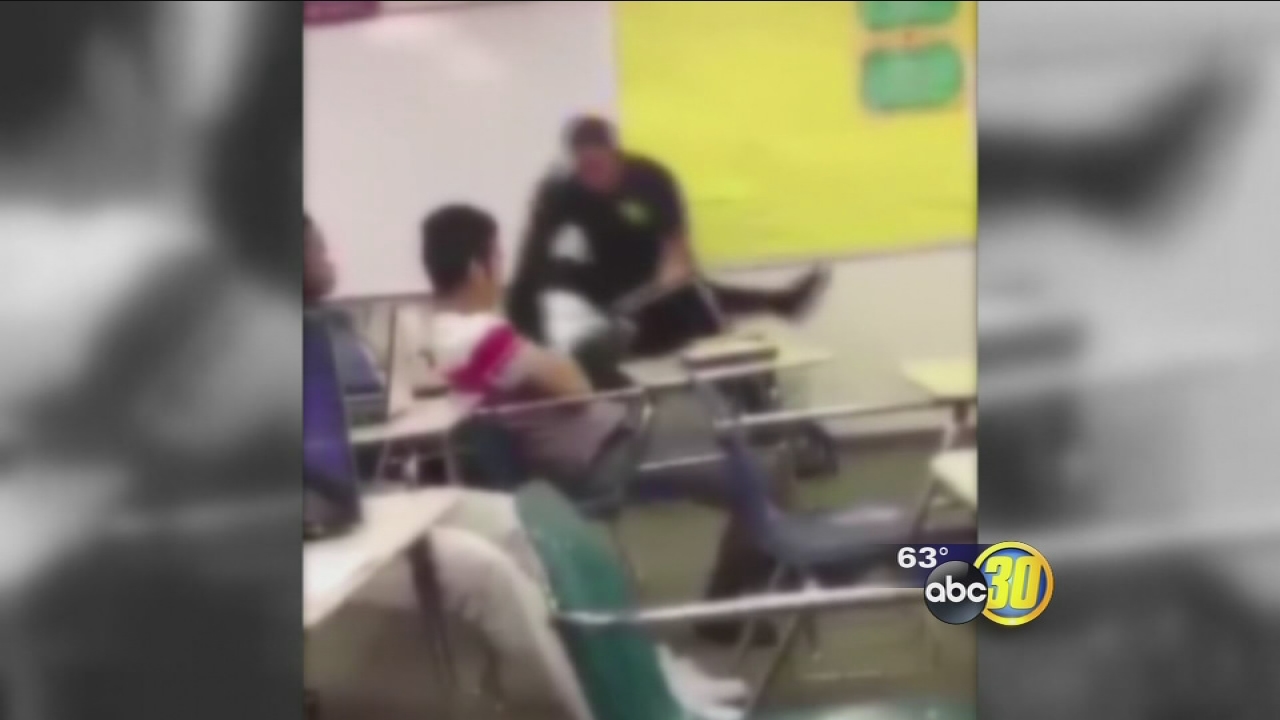 The agency's training unit looked at video of the incident and determined Fields did not follow proper training and procedure, the sheriff said.

Calls for Fields to be fired began mounting almost immediately after the video surfaced, and the FBI began a civil rights investigation at Lott's request. The confrontation was captured on cellphones by students, one of whom said it all started when the girl pulled out her cellphone and refused her math teacher's attempt to take it away during class.

"She now has a cast on her arm, she has neck and back injuries. She has a Band-Aid on her forehead where she suffered rug burn on her forehead," Columbia attorney Todd Rutherford, who is representing the teen, told ABC's "Good Morning America" on Wednesday.

Lott had said Tuesday that the girl was uninjured in the confrontation but "may have had a rug burn."

The sheriff suspended Fields without pay Monday. Lott, who rushed home from an out of town conference when the news broke, said that a teacher and vice principal in the classroom at the time felt the officer acted appropriately.

Email, phone and text messages for Fields have not been returned.

More than a dozen parents and community members spoke out at a Tuesday night meeting of the Richland 2 School District. Some, black and white alike, said the issue wasn't based on race, and, while the officer may have used unnecessary force, the whole incident shows that teachers and administrators need to work harder on finding ways to handle defiant students.

Craig Conwell was angry, imploring board members to take action and saying Fields should have been fired immediately.

"If that was my daughter ... that officer being fired would be the least of his worries," Conwell said. "We are sick and tired of black women being abused. You can say it's not racist all you want to."

The deputy also arrested a second girl who verbally objected to his actions. Both girls were charged with disturbing schools and released to their parents. Their names were not officially released.

The second student, Niya Kenny, told WLTX-TV that she felt she had to say something. Doris Kenny said she's proud her daughter was "brave enough to speak out against what was going on."

Lt. Curtis Wilson told The Associated Press in an email to "keep in mind this is not a race issue."

"To be thrown out of her seat as she was thrown, and dumped on the floor ... I don't ever recall a female student who is not of color (being treated this way). It doesn't affect white students," Randolph said.

Fields, who also helped coach the Spring Valley football team, has prevailed against accusations of excessive force and racial bias before.

Trial is set for January in the case of an expelled student who claims Fields targeted blacks and falsely accused him of being a gang member in 2013. In another case, a federal jury sided with Fields after a black couple accused him of excessive force and battery during a noise complaint arrest in 2005. A third lawsuit, dismissed in 2009, involved a woman who accused him of battery and violating her rights during a 2006 arrest.
Related topics:
south carolinau.s. & world
Copyright © 2022 by The Associated Press. All Rights Reserved.
RELATED
Video shows school officer tossing student in classroom
U.S. & WORLD
By the numbers: Stats that tell story of Biden's first year
Suspect captured in killing of woman, 24, working at furniture store
Biden, 1 year in, says nation weary from COVID but in a better place
Watch NatGeo documentary 'The First Wave' free for 48 hours
TOP STORIES
Man pleads not guilty to murdering brother-in-law on Christmas Eve
Armed man robs 7-Eleven in east central Fresno
Some Valley hospitals postpone 'elective' surgeries due to COVID surge
Man who admitted killing dog to Fresno police facing more accusations
Man charged with murder of 2-year-old whose father died a year earlier
24-year-old man shot in central Fresno, police say
43-year-old man stabbed in northwest Fresno, police say
Show More
How reliable are rapid tests? Dr. explains when to depend on results
Is there home appraisal bias in Fresno? Professionals weigh in
Housing Watch: Million-dollar homes at Ventana Hills in Fresno County
Good Sports: Fresno woman gains recognition with indoor rowing
Valley ag business continues to feel impact of supply chain issues
More TOP STORIES News