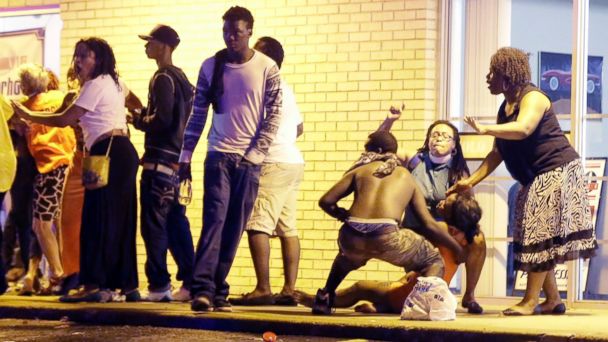 Police shot a man who fired on them in Ferguson, Missouri, late Sunday evening, the St. Louis County Police Department said, following the one-year anniversary of the death of Michael Brown.

In an early Monday morning press conference, St. Louis County Police Department Chief Jon Belmar explained that two groups exchanged gunfire on the west side of W. Florissant near the Sam's Market in Ferguson, amid a protest marking Brown's death.

A male from one of those groups left, walked across the street, and stopped on the shoulder. Four plainclothes officers in an SUV saw that person, and pulled their vehicle out. The suspect opened fire on the car, hitting the grill and windshield.

The unidentified suspect has been described as approximately 20 years old and in critical condition. Meanwhile, the officers were placed on administrative leave.

A stolen firearm was recovered from the scene, according to authorities.

Earlier, in a series of tweets, the department said an officer was involved in an officer-involved shooting after coming under heavy gunfire. At least two unmarked cars took shots during the gunfire, according to police.

The shooting of the suspect comes one year after the death of Brown, an 18-year-old unarmed black teen who was shot and killed by Ferguson police officer Darren Wilson. A grand jury failed to prosecute Wilson, who resigned last November. The death of Brown sparked protests and touched off the national "Black Lives Matter" movement.

Earlier Sunday, a march was held in Ferguson in Brown's honor.

The Associated Press contributed to this article.