Connor Coughenour 'stands up to cancer' during 2015 World Series 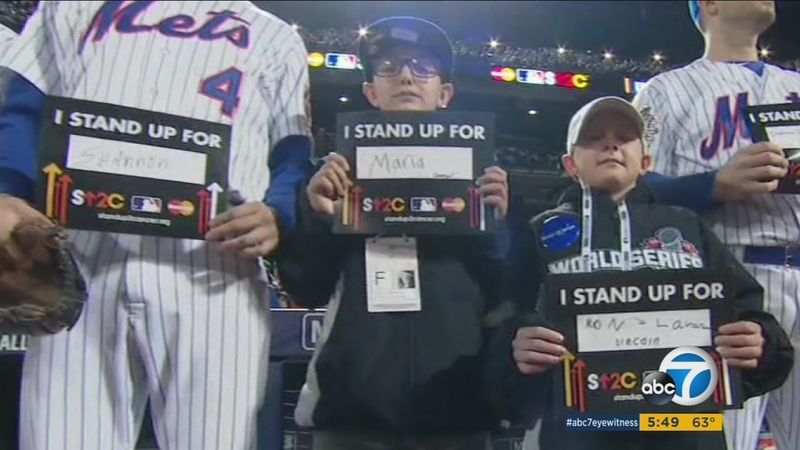 SANTA CLARITA, Calif. -- An 11-year-old boy in Santa Clarita is proving he may be stronger than the sports hero that decorate his bedroom.

"I knew from the moment he was born, he was different, there was just something about him," Christina Teena, the mother of Connor Coughenour, said.

Connor was selected among 350 baseball players his age in Santa Clarita to be on the All-Star team two years ago.

A bump was later discovered on the back of his leg. His mother thought it was just part of the territory that comes with playing catcher.

But it was in fact a tumor.

"I remember just walking to corners and just curling into a ball and saying, 'I can't believe this is what's happening," Teena recalled.

Connor would endure 14 rounds of chemotherapy and nearly a dozen stays at the children's hospital to treat him for Ewing's sarcoma, a rare bone cancer.

The cancer ended up claiming 12 centimeters of his fibula.

"It wasn't really hard losing the hair because I had always kept my hair short, but being in the wheelchair was weird not being able to walk," Connor said.

Connor was inspired to meet former Los Angeles Lakers forward Pau Gasol while in the hospital, and his autographed shoe still stands in the family living room as a reminder of perseverance.

Thanks to the Make-A-Wish Foundation, the nation watched Connor stand up for cancer along with players of the New York Mets.

Connor held a sign that read "Maria" for his aunt who is now battling cancer.

"It was really cool being able to be on the field and stand up for all the people who have battled and lost their lives to cancer," Connor said.

Two years before his cancer diagnosis Connor received an autograph at a minor league baseball game.

The player put the bible quote Philippians 4:13 on it.

"I can do all things through Christ who strengthens me," Connor recited.