Investigators have their eye on a grassy field near Shields and Academy. It was one of 12 that went up in flames last week. Now, Cal Fire thinks that arsonist could be connected to the fire here.

A dozen fires sent dozens of fire fighters across the county last week, spanning the length of 180. From Shields and Academy to Herndon and Academy and beyond. Investigators eventually connected the locations to each other and now possibly, to one man. Michael Hamilton Senior is now in jail, charged with 30 counts of arson. Investigators hesitate to say how they believe he started the fires or how they made the connection. But many of the incidents they're looking at are in and around Squaw Valley where Hamilton Senior calls home.

Captain Ryan Michaels said, "Many of those fires are being connected to Michael Wayne Senior it's an ongoing investigation as soon as we get more details we'll release them."

Hamilton Senior was arrested this week after a traffic stop in Squaw Valley. Investigators say he's been cooperative, but no word on a motive. Arson, while always a serious crime, is perhaps even more serious when committed in the state's historic drought.

Captain Michaels said, "Many of the fires we responded to over the last few weeks had potential, several threatened structures if it wasn't for aircraft and fire fighters on the ground to defend those homes it would have been significantly more damage, dollar loss and devastation."

Michaels said the land that went up in flames isn't just grass. "Farmers, cattle they're pushing across there they count on that thought it may seem like a simple grass fire some of that is their livelihood and this could impact our communities."

And he said, it impacts our resources, which are already stretched thin- as it doesn't take much to ignite dry land in a thirsty environment. The district attorney says Hamilton Senior will be arraigned Thursday. If convicted he could face 58 years in prison. 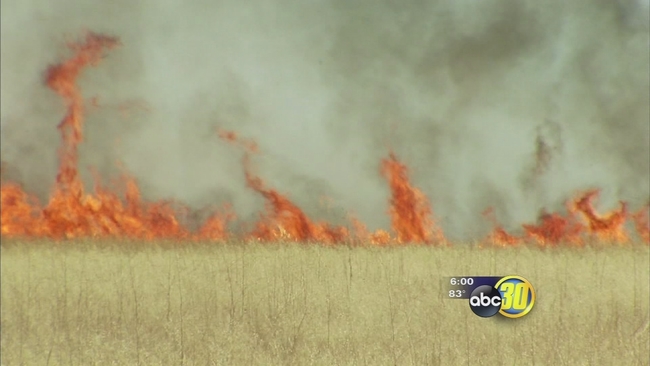