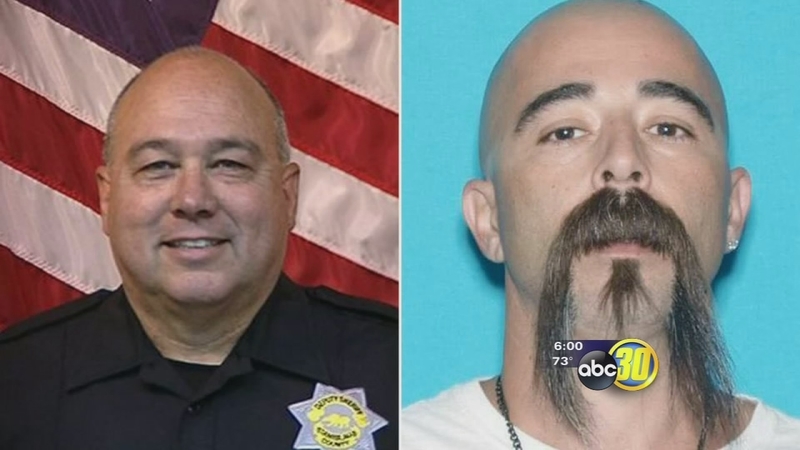 HUGHSON, Calif. -- A Stanislaus County Sheriff's deputy was shot twice in the head and killed Sunday while responding to a call about a suspicious car and person. The suspect in the case was arrested later after trying to steal a woman's purse, authorities said.

Deputy Dennis Wallace, a 20-year-veteran, was shot at point-blank range as he checked on a report of a suspicious van parked near a fishing access spot outside the city of Hughson, about 10 miles southeast of Modesto, Stanislaus County Sheriff Adam Christianson said.

"He was executed," Christianson said. "We believe that Deputy Wallace was killed outside of the car, and we know for a fact that the gun used in this crime was in direct contact with his head when the trigger was pulled twice."

Deputy Dennis Wallace, a 20-year-veteran, was shot at point-blank range as he checked on a report of a suspicious van

Dispatch told Wallace the car was stolen, which prompted the deputy to request backup. A second deputy arrived and found him wounded. He was taken to a hospital, where he died, the department said.

The suspect, who has been identified as David Machado, 36, abandoned the stolen van and carjacked an escape vehicle in the nearby city of Keyes, it said.

We have confirmed David Machado is in custody. We will advise the media when we will hold a press conference here at the Sheriff's Office.

Machado was arrested hours later 150 miles south of Hughson in the town of Lindsay after he tried to steal a woman's purse at a convenience store, Christianson said.

The woman fought Machado and called Lindsay police, prompting him to run from the scene. Officers chased after him on foot and took him into custody without incident, Christianson said.

Lindsay officers didn't initially recognize Machado as the suspect in the killing of Wallace. But once he was in custody, they identified him through tattoos and a photograph and immediately contacted the Stanislaus County Sheriff's Department, Christianson said.

Wallace, 53, lived and worked in Hughson, where he was involved in youth soccer, refereeing football and serving as a liaison between schools and law enforcement.

""He wasn't just assigned to Hughson; he's a fixture in Hughson. He was so well-loved," Stanislaus County Supervisor Vito Chiesa, who also lives in Hughson, told the Modesto Bee.