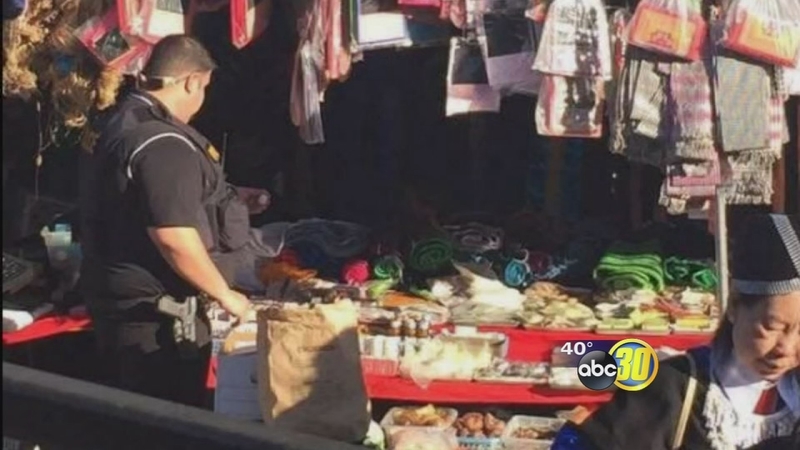 FRESNO, Calif. (KFSN) -- Thousands of Hmong New Year patrons gathered at the fairgrounds and among them investigators from the State Department of Consumer Affairs. And they arrested at least one vendor-- her husband spoke to us through a translator.

"There was some medication that they took and there was also a bag, a pouch, with $2,000 in there and they took that as well."

He said the medication was some sort of hand cream and has been used in Asia for hundreds of years. So when investigators came to their booth he said he and his wife were very confused.

"There should be a paper or something with strict regulations specifying what you can and can't sell."

Executive Director Charlie Vang oversees the annual event. He was informed someone was arrested for selling illegal medication.

An investigator with the State Department of Consumer Affairs confirms they did make an arrest but could not give us any other information.

"In the old country, in Asia, some kind of medicine are not prescribed you can go to the store and the pharmacy and buy it. So they think it'll be the same thing but actually it's not," said Vang.

This isn't the first time vendors at the celebration have been accused of selling illegal goods. In 2008, an Action News investigation uncovered a variety of antibiotics and pain medications being sold illegally.

Vang said he has been in charge of the event for years and this is the first time he has heard of this type of issue.

"It happened to some of the elderly people. They cannot read or write-- maybe they think they can sell it but that's just not true."

Now the vendor will have to go to court which her husband said isn't necessary.

"He was a soldier fighting with the American troops back then and so to be treated like that is very unfair," said the vendor's translator.

That vendor was taken to jail for two misdemeanor crimes, she is no longer in custody.