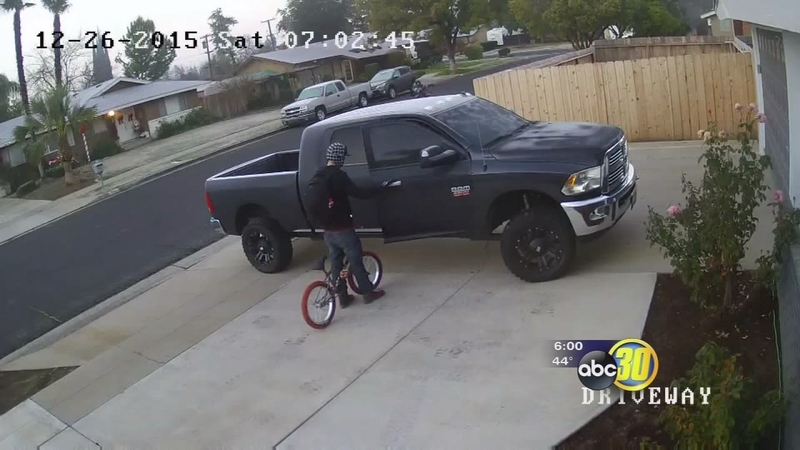 FRESNO, Calif. (KFSN) -- In a day-after-Christmas burglary caught on camera, the suspects are on full display, thanks to a high-tech security system.

The suspects made a quick strike and took off just as Thomas Putzel came to check on his truck. They got away for the moment, but the Putzels have a high quality video surveillance system and now, they have a whole lot of eyes working to help solve the crime.

At first glance, the three young men riding little dirt bikes through this neighborhood on the morning after Christmas seem harmless enough. But when they turned around and came back, they seemed to scope out Thomas and Susan Putzel's backyard and their pickup.

Sheriff's deputies say the slightly opened door they saw is an invitation for an all-too-common crime. "Vehicle burglaries continue to be a constant problem for us, basically all year-round," said Fresno County sheriff's spokesman Tony Botti.

And that's exactly what happened to the Putzels.

The guy in the black and white hat came back, opened the door to the truck, grabbed everything he could find quickly, and took off when he heard activity coming from the house. All three young men pedaled away quickly. They'd escaped for the time being. But the Putzels had a secret weapon that made this story possible and could make a detective's work a lot easier.

One of the eight cameras around their house caught it all on high quality video. "Since the break-in, Thomas has put this on Facebook and he's had more than 2000 shares," said TJ Jolliff of Red Wave Security. "He's already gotten three phone calls from people who think they know him - the kid from the incident."

Red Wave Security installed the Putzels' cameras. Three months ago, police say Shane Presho was caught in the act by another of their cameras. It's a growing business as homeowners realize the best way to stop burglars is by helping police catch the crooks. "Video evidence has become so valuable these days," said Botti. "More and more people are installing surveillance cameras, which is a huge help."