KFSN
REEDLEY, Calif. (KFSN) -- The accident happened at 3:30 in the morning when the driver veered off the side of the road and into the pole of a highway sign. The impact nearly split the bus in half.

The charter bus started in Mexico and was heading to Pasco, Washington where many of the passengers were going to pick apples. Five people were killed and most of the other 30 passengers suffered major or critical injuries. Just four people walked away unharmed.

When Benjamin Acosta bought a bus ride to Washington it was supposed to be his ticket to work in an apple orchard-- but the trip ended near Livingston. In Spanish, he said he was sleeping when the bus hit something.

It was a pole off to the side of highway 99. Acosta woke up just in time to see it splitting the bus down the middle towards him. He said people were being tossed around and metal was flying everywhere

He said it was ugly, it didn't feel real, everyone was yelling help me. Acosta was sitting three or four rows from the back. The pole, he said, stopped in front of him.

For a moment, everyone was trapped, people were trying to break windows to get out. It didn't work for him, so he crawled out of a hole in the bottom of the bus and the driver, he said, helped him escape.

Acosta said the bus driver went back to help more people, but he said a passing car hit him on the highway.

He told the story to police and was taken to the hospital. His lip needed stitches, he had bruises and cuts, and hours later his wife, Romona Huerta, got the call that he was ok.

"I wish he would have never got on that bus," said Huerta.

She said the bus picked her husband up two and a half hours late at a gas station in Goshen about 1:30 in the morning. Acosta said the ride was uncomfortable, the bus was shaky and making a lot of noise.

"Something wasn't right from the beginning, and him feeling like that-- it was a scary situation," said Huerta.

Acosta isn't sure what caused the crash. He said the driver seemed fine, but he had a heavy foot on the gas.

"He feels that something happened that put them all in jeopardy. Whether he fell asleep or what, he doesn't know," said Huerta.

In time they both hope to get answers, for now, Acosta said he's just happy to be alive.
Related topics:
merced countybus crashfresno countyreedleyhighway 99
Copyright © 2020 KFSN-TV. All Rights Reserved.
RELATED 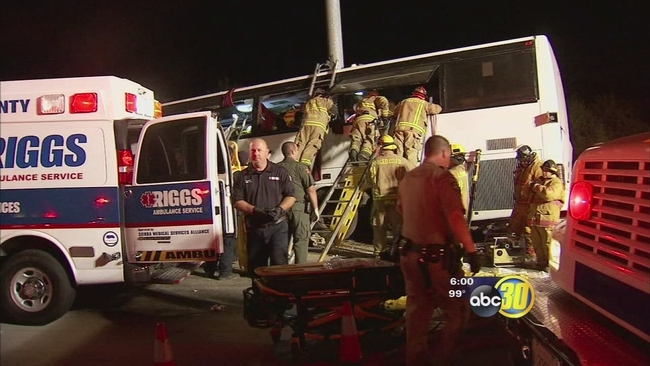