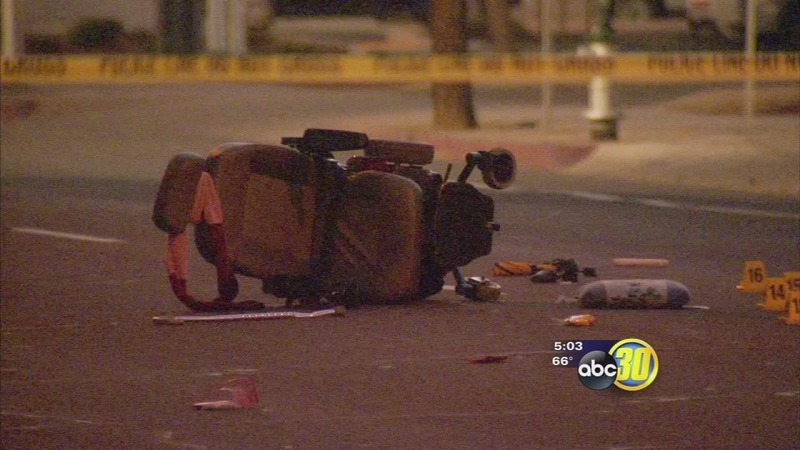 FRESNO, Calif. (KFSN) -- Amelia Whisnand was crossing the street in her motorized wheelchair on Thursday afternoon when a white van slammed into her.

The incident was captured by surveillance cameras. The suspect and his vehicle were spotted Friday morning, and he was arrested.

The white van with front end damage was spotted by a police department employee and officers followed it to the farmers market at Manchester Mall. Police arrested Luis Garcia.

Lt. Joe Gomez with the Fresno Police department said the 51-year-old acknowledged his involvement in the hit-and-run. "What he said indicates he was driving the vehicle yesterday when he struck the woman," Gomez said.

Police investigators said damage to the van matched evidence found at the scene, but the most compelling evidence was actual surveillance video of the horrible accident. A still photograph shows the 80-year-old Whisnand in the crosswalk, just a split second before the van hit her.

Witnesses at the nearby tire shop said it was horrible. Police said Garcia actually stopped, got out and looked at the woman, then drove off. Whisnand was a resident of the Silvercrest Senior home just down the street.

Orelia Warren also lives there and said she saw Amelia all the time. "She'd go out every day she was an active lady," Warren said. "She wasn't the type of lady to sit in her apartment every day, she'd get out."

Warren said it's upsetting and a reminder of the constant dangers those who rely on motorized wheelchairs face every day. "It's so sad, it's really sad. Senior citizens, a lot of us, have to use these mobile outfit things and people seem like they don't care," Warren said.

Warren was hit at the intersection of Fulton and Divisadero two years ago. She was badly shaken up, but not seriously hurt.

The driver who hit Whisnand is now facing charges of vehicular manslaughter and felony hit-and-run causing death. Police said he had been drinking when he was arrested this morning.