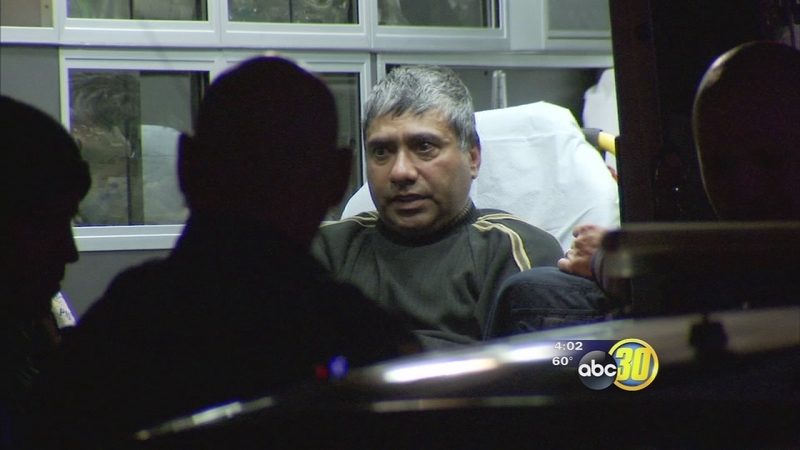 A late night robbery sparked new safety concerns for the truckers parked along Valley highways. "They bring in guns in these trucks," said Debbie Hoblitzell, a long-haul driver from St. Louis. "They don't do it often, (but they do it) because people try to hurt us."

Fresno police are looking for the armed robber who struck in the middle of the night. The robbery happened in the middle of a strip mall tucked away just off Shaw Avenue. The victim says he was asleep in his cab when a guy armed with a semi-automatic handgun and a knife opened the door and held him up.

From the back of an ambulance, this truck driver told police about the masked man who interrupted his night with violence. Just after midnight, the door of his cab swung open, and the armed suspect came looking for money. "The victim, fearing he could be shot or stabbed, complied with the suspect," said Lt. David Ramos of the Fresno Police Department. "He was in the process of giving him money. Unfortunately, during the robbery the suspect struck the victim several times."

The attacker disappeared into the darkness.

The victim lost his cash and a GPS, but survived with a few bumps and bruises. It's a familiar story for a lot of truckers. The ones who drive long routes say spending a night on the road seems to have gotten more dangerous. "I've had more trouble this year with people banging on the trucks trying to get at you," said Hoblitzell.

She says she feels safer in a crowded space like Klein's Truck Stop along Highway 99. But once the sun sets, she locks herself inside her truck. She's seen too much trouble to leave it unlocked or stay in more isolated spots. And the rules of safety are changing for a lot of truckers -- like Bob Castelli, who brings an extra layer of protection along for the ride. "I'm also, I'm registered, so I can carry a concealed weapon and if for any reason I find myself in trouble, that's the next best thing to do," Castelli said.

Fresno police say the Wednesday morning robbery doesn't match the description of any similar crimes in this area.