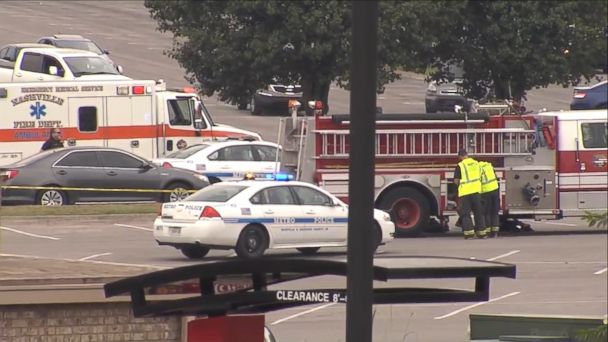 A gunman wielding a hatchet and a fake bomb was killed by cops after he unleashed pepper spray in a Tennessee movie theater, police said.

The mayhem unfolded during an screening of "Mad Max: Fury Road" at the Carmine Hickory Theater in Antioch around 1:13 p.m.

Police said around 8 people were inside the theater when the 29-year-old suspect, a local man, unleashed pepper spray. Police initially said he was 51.

Three people were treated for exposure to the chemical.

"Their faces were blasted with pepper spray," Metro Nashville Police spokesman Don Aaron said of one of those injured.

Aaron said that the suspect, who bought a ticket to the movie, was wearing a backpack on his chest and had a surgical mask on his face when he sprayed pepper spray containing red dye inside the theater.

One member of a team of police encountered the gunman in the back of the theater and opened fire on him after seeing him raise a gun, according to Chief Steve Anderson.

The officer then retreated from the theater as the SWAT team arrived.

After that, the gunman made his way outside the theater, came at them in a threatening manner and officers opened fire, Anderson said.

It was not clear if the gunman got off any shots, according to the chief. Earlier, police said that he fired at the first responding officer.

It was also not clear if the first officer's shot hit him.

Nashville Fire Department spokesman Brian Haas said there were no major injuries in the attack. Three people were treated for exposure to pepper spray and a man suffered a cut from the suspect's hatchet.

The bag on the suspect's chest was not the only backpack that he reportedly brought to the scene. The bomb squad later detonated one of the bags after determining that there was a fake bomb inside. The other had nothing harmful inside/

A man who said he was inside the theater at the time of the attack said that he and his daughter were pepper sprayed and were helped by people outside the theater.

"It really did help give me faith in humanity again," the man, who did not reveal his name, said of the bystanders.

"I would ask anyone to pray for his family," he said of the shooter.