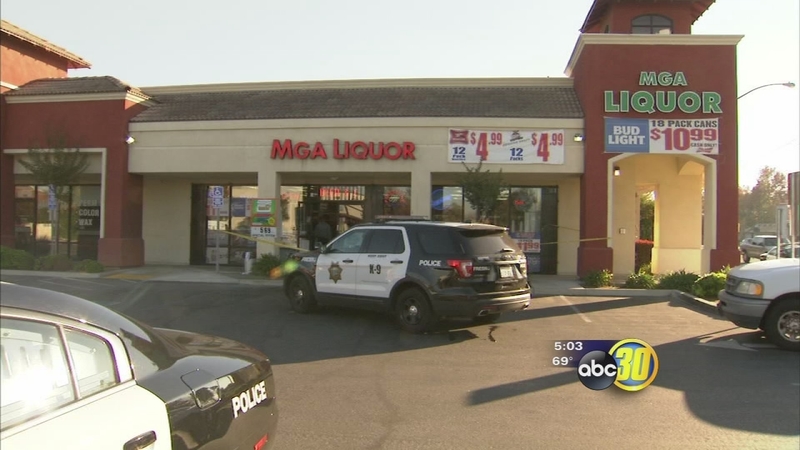 FRESNO, Calif. (KFSN) -- Two clerks spent early Friday handcuffed in a bathroom while thieves looted their store. The robbery happened at the MGA Liquor Store at Bullard and Fresno street in northeast Fresno.

The two clerks were trapped in the bathroom for six hours until another employee came to open the store in the morning. The robbery took place just before 1 a.m. and carried out by two masked men with guns.

The thieves came in just before closing while two store employees were counting the day's cash. The robbers were wearing hoodies and masks, and they forced the two employees into the bathroom at gunpoint, where they were handcuffed to a hand railing.

"They tied my employees to the restroom and then they robbed us," regional manager Vanshdeep Sidhu said. "They took all the expensive stuff from the shelf, they break into our storage department and took all the cigarette cartons and all the cash from the registers and the safe."

"And then spent at least an hour going through the store and what they actually asked the clerks for a large trash bag for liquor," Lt. Joe Gomez with the Fresno Police Department said. "So, they took expensive liquor."

And they took cartons and cartons of cigarettes.

"It's an easy thing to sell off the street," Sidhu explained. "What we heard cigarettes you stole from a carton cost us almost $50 and they sell it $20 out, easy money for them."

The $2 a pack increase in the state cigarette tax takes effect in April, it's goal to give smokers incentive to quit but also likely to give thieves even more incentive. To steal them.

"Cigarettes have always been stolen a great deal in these burglaries these commercial businesses and I think even more so in the future that they are going to steal because they are going up significantly," Gomez said.