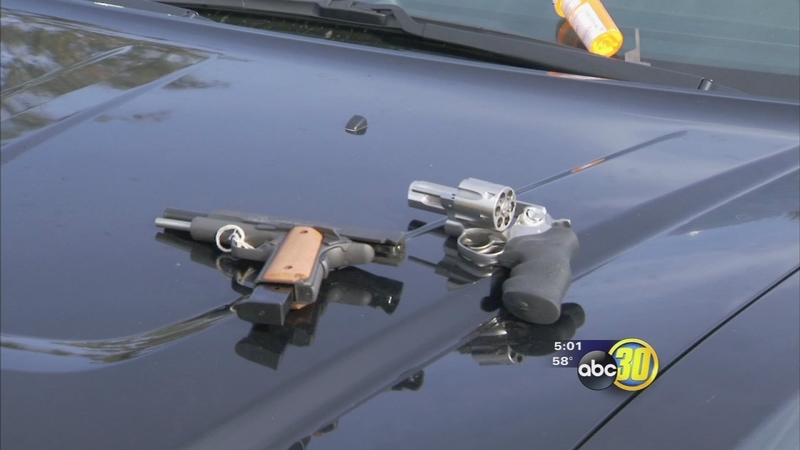 FRESNO, Calif. (KFSN) -- Fresno Police arrested a suspected teen burglar Friday after they say he stole guns from a home in northeast Fresno.

Officers nabbed the 17-year-old at Cary Park near Fashion Fair Mall. Police are crediting neighbors for alerting them to the suspect who took two guns and was planning to come back for more.

"When they detained him, they're pat searching him and he had two handguns on him in his waistband," Lt. Joe Gomez with the Fresno Police Department said.

They found a .45 caliber semiautomatic and .357 revolver along with ammunition, prescription drugs and a big jar of coins all taken from a house in the 2800 block of Pico Avenue. Police caught the teen because next-door neighbor Teresa Roma called police after her dogs acted up.

"Yes, I heard my dogs barking," she said. "I have three dogs and they were barking. It was an unusual bark actually."

She then noticed a duffel bag under and open window and that her neighbor's car wasn't in the driveway. She called 911 and then another neighbor spotted the suspect walking down the street. An officer assigned to the mall stopped the suspect in the park, and an ambulance was called after the suspect told officers he was sick from taking drugs.

Police said the teen first tried to kick open the side garage door then broke a window. He is a suspect in similar burglaries.

"We do have in the northeast area a rash of door-kick burglaries," Gomez said. "So, we are hoping this is our man and they are going to stop."

In addition to taking the pistols, police say the young man had set aside four rifles and a large quantity of ammunition he may have been planning to retrieve later. They credit neighbors with keeping these weapons off the street.