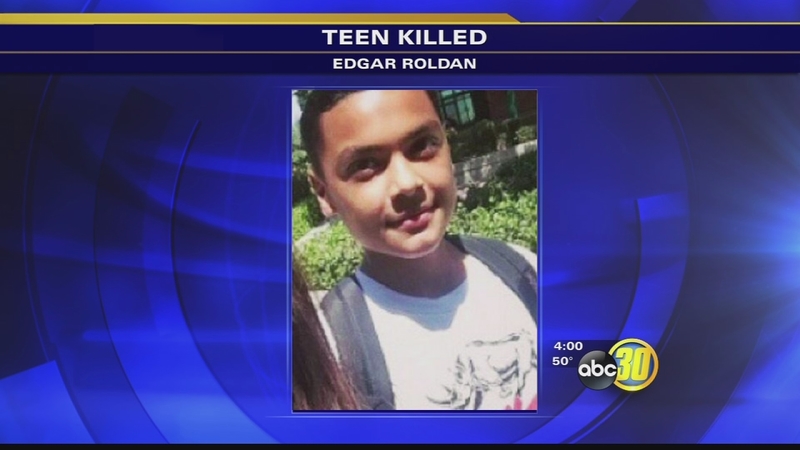 LIVINGSTON, Calif. (KFSN) -- Family members said Edgar Roldan was an 8th grader who loved playing soccer and hanging out with his friends. He died Tuesday when he was struck by the train on Main Street.

Roldan was with a group of teenagers when they attempted to cross these tracks. The crossing arms were dropping and Roldan tried to make it, but he slipped and fell into the path of the train.

Tearful friends and teenagers stopped at the train tracks Wednesday where the athlete, once so full of energy lost his life. "He was funny. And I don't know, I don't think anyone would picture him in this way," said Isabel Carrillo, victim's friend

Friends say Roldan had just left Gene-O's Pizza Tuesday and was heading home before soccer practice when he and others walked and ran across the train tracks. "He thought he could make it across. He started to run. He ended up slipping and I believe that's when he was struck," said Lt. Chris Soria, Livingston Police Department.

Roldan's brother was with him along with several friends. Investigators say at least one friend urged him not to cross, before witnessing in horror the train striking the teen and throwing him about 50 feet. "For someone who is only 13-years-old and for his life to end like that. Being a parent myself, I can't even imagine what the family is going through," said Lt. Soria.

Roldan was the youngest of four children. Denise Aguilar said he was her boyfriend for the past six months. "He was just nice. And a good person."

During their time together, the two made a lot of great memories. "We used to always go to football games and then they ended, so we didn't have nothing to do. So he would just come over and talk for a little bit."

Officials with the railroad returned to the crash scene and spoke to at least one witness Wednesday morning. Since school is out for Thanksgiving break, many students are getting together to talk about the tragedy. One of the friends who was with Roldan Tuesday sent a text message to Aguilar expressing his sorrow and regret over his death. "He just said that he is sorry for not being able to save him."

An autopsy was done this morning and revealed Aguilar died of major blunt force trauma.