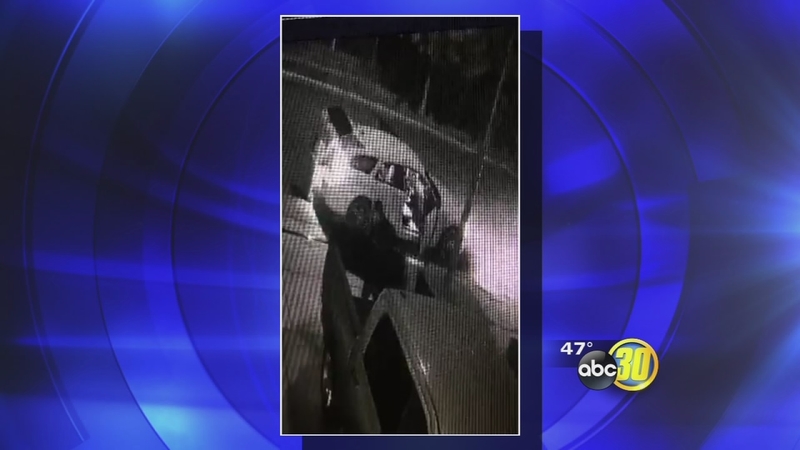 SANGER, Calif. (KFSN) -- Sanger Police are searching for two tailgate thieves. They ripped one off of a Dodge truck early Wednesday morning and it was all caught on camera.

Mario Herrera, who owns the Pick-Em Up Truck Store in Fresno, said, "There's people out there, looking for an easy dollar."

He hears about it every day at the shop and every night, he says, there's a new victim, "Yes, it's terrible," he added.

Herrera said a lot of his customers are victims of tailgate thieves and he wasn't surprised when he watched surveillance video of two people stealing one in Sanger from a 2012 Dodge Truck. "Gentleman gets off the vehicle, notices there's no protection, no locks, removes the cables from each side of the tailgate," Herrera said as he watched the video.

It was a quick midnight hit-- roughly 30 seconds from start to finish. The owner, Arthur Negrete, didn't hear it. The alarm didn't go off and he says police couldn't find fingerprints. Negrete said, "I'm like, on the road all day and all I can think about is these crummy guys who took my dang tailgate."

He might not get it back and a salvaged replacement, Negrete said, will cost him $500 to $1,000. Herrera says the same tailgate is even more expensive at a dealership and the people who stole the original one will likely sell it on the street. "They'll probably go out, sell it for 50 or $100," Negrete said, "customer will go to the dealer and spend 15 to $2,500 to replace that item."

He said it's the same story every time and a little aftermarket lock you can find at his shop, or online, can keep it from happening. "You spend $30, you wake up and you know your tailgate is gonna be there," Herrera said.