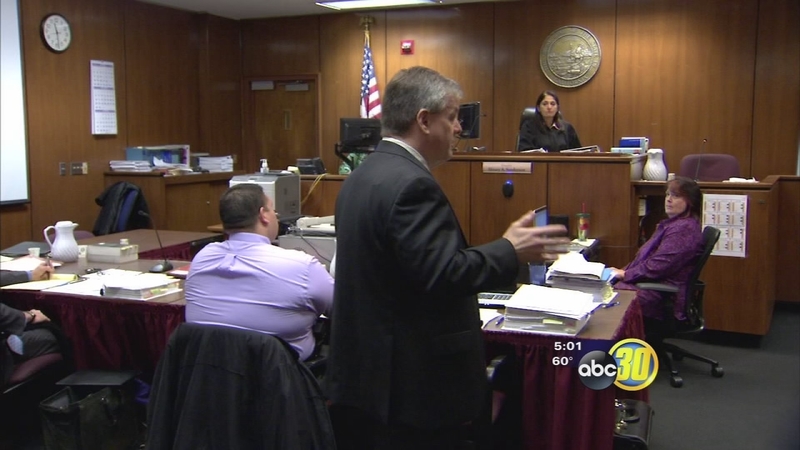 FRESNO, Calif. (KFSN) -- Eloy Romero Jr. is accused of fatally shooting Joseph Blunt and George Duarte last May. But investigators didn't discover the murder until an autopsy revealed they were shot to death at close range. The victims were found after the car they were in crashed into a tree in Fresno County.

Prosecutors said Romero had a month to make up an alibi before authorities finally caught up with him in Reedley. He became a suspect in the crime after detectives discovered his cell phone in the car with a lot of insight and evidence.

Romero was angry, and according to prosecutors, believed his mother's death a few years ago was at the hands of a Norteno gang member. But a deputy district attorney told jurors she died of either natural causes or a drug overdose. Regardless the reason, detectives believe her death is the motivating factor behind the murders. "This affected Romero in a way where he decided to shoot and kill Joseph Blunt and George Duarte execution style. Pop, pop, pop pop-- in the back of the head," said William Lacey, Deputy District Attorney.

Both victims have Norteno gang ties.

Initially, officers thought they were investigating a fatal car crash, not a double homicide. An autopsy showed Blunt and Duarte were each shot twice in the back of the head with a .38 caliber handgun.

"It's also determined at this time that the shooter based upon the powdering marks on the heads of the victims was no more, or the gun was no more than 2 feet away."

But the public defender representing Romero told jurors the crime scene wasn't preserved initially when it should have been. "The car is towed to a tow yard and put on this tow yard, not photographed or secured. At one point, one of the doors that was removed is shoved in the rear windshield of the vehicle because it's stored that way," said Scott Baly, public defender.

After the murder, Romero is accused of leaving the scene and the car that had slammed into a tree. But, prosecutors say he left his phone and it was found by investigators. The messages between Blunt and Romero gave detectives their first leads.
"It's clear from these text messages and phone calls that the two of them are planning to meet up late in the evening," said

Around midnight, the communication ends-- about the time investigators believe both victims were shot to death.

Romero could face up to life in prison without parole if he is convicted.