Pilot William Huene, 47, and his passenger, 32-year-old Chase Splan, both from Fresno, died when the small plane they were in crashed into the San Joaquin River on Monday. The two men were close friends.
KFSN 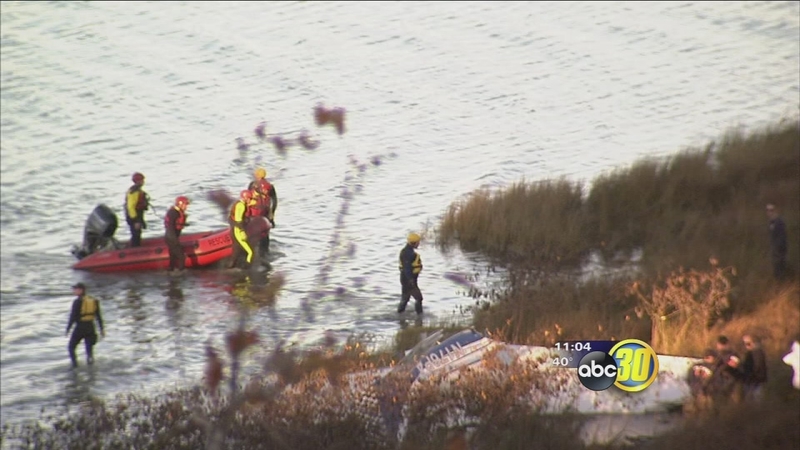 Authorities said they were killed shortly after the plane took off from Sierra Sky Park around 1:30 p.m. The bodies were recovered by firefighters hours later, and crews will guard the scene until the NTSB starts their investigation in the morning.

Along the Sierra Sky Park runway are homes, neighbors and friends. So, a deadly plane crash one day after Christmas is affecting their entire community.

The bodies were recovered by firefighters hours and crews will guard the scene until the NTSB starts their investigation in the morning.

"Something like this hasn't happened in a long time," neighbor Mike Rhodes said.

Rhodes lives along the airstrip, and he was outside when the plane took off.

"I was over here at this guy's hanger. I heard him rotate and climb out," he recalled. "I heard the engine stutter and I heard a thud and that's when we ran out here to see if could find the airplane."

Rhodes and first responders found the plane partially submerged in the San Joaquin River, just north of the runway. Pieces of the plane were scattered in the water and the aircraft itself was bent backward and in half.

"On an environmental level, we made sure there was no leaking fluids are going to get into the actual river," Capt. Pete Martinez with the Fresno Fire Department said. "And so our rescue team, as well as our HAZMAT team, were down there making the scene was secure."

It took firefighters several hours to recover the bodies before they handed the scene to the FAA, in what's likely the first double-fatal crash at this airport.

Now the FAA and NTSB are tasked with figuring out how and why the plane went down and find the answers this small community needs to move forward and heal from loss.
Related topics:
fresnofresnoplane crash
Copyright © 2021 KFSN-TV. All Rights Reserved.
FRESNO
Valley companies look to hire, experience work shortage
George Lopez to bring comedy show to Fresno
Dozens help clean up at Camp Fresno
Bakery in River Park celebrates grand opening
TOP STORIES
Merced teacher back home after battle with COVID-19
Looking back at the ups and downs of COVID in Central CA
24-year-old man shot in southwest Fresno, police say
What changes throughout Central California as state reopens
CA has reopened, but not everyone can go maskless
Suspect involved in standoff in Kings County identified
19-year-old arrested on arson charges for NW Fresno fires
Show More
What to expect from CA's reopening today
Newsom picks 10 winners of $15M to celebrate reopening
1 killed in shooting on Hwy 99 near Merced
Valley doctors discuss California's reopening
Valley travel industry shows signs of rebound as CA reopens
More TOP STORIES News