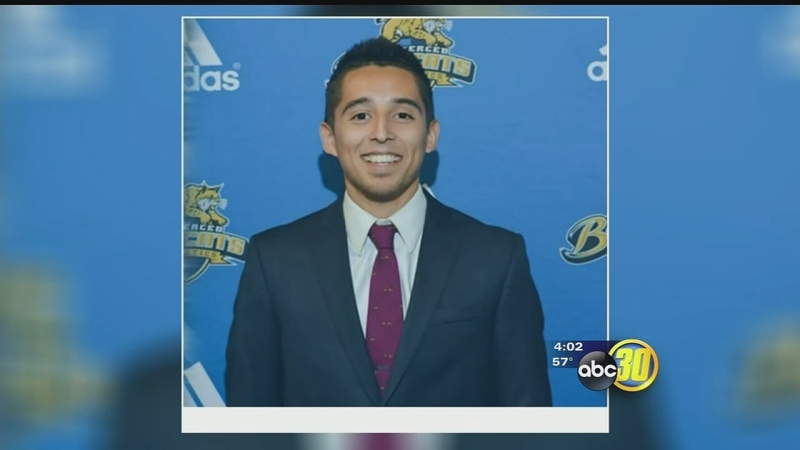 MERCED, Calif. (KFSN) -- A university is now in mourning after a UC Merced coach was killed in a motorcycle accident.

"We're still getting over the shock of it. Losing someone like Ryan is a tremendous loss," said David Dunham, Director of Recreation and Athletics.

Merced police said 27-year-old Ryan Nunez was riding his motorcycle on Bellevue when the accident happened. They said the bike may have gotten into a high-speed wobble, meaning the handlebars start to quickly shake back and forth.

Lt. Struble said Nunez may have stepped on the brakes causing the wobble to get worse. They said he then drove off the road and into the tree sustaining the deadly injuries.

Struble said Nunez was wearing protective gear and going the speed limit, he said it was just a case of bad luck, bad timing, and an overall bad situation.

"It's a tragic accident, you hate to see it-- unfortunately they do happen," said Struble.

ABC30 was able to speak with Nunez' family who said they did not know how to react when they got the call.

"My parents are holding up, his wife just taking it hard. We're just trying to take it one step at a time," said Raylene Nunez, Nunez's sister.

They said he was always a happy person, very cautious when riding his bike, and passionate about running. A passion he went on to develop at UC Merced as the head coach of the men and women's cross country team.

"He took two runners to nationals earlier this month-- had runners qualify in nationals every year he's coached," said Dunham.

Dunham said this loss is not just impacting the department, but the school as a whole.

"Losing someone like that young and that impactful leaves an empty spot and it's going to take a while for our department and our students to really get over that if they ever can."

The school is working with the family for a memorial-- they also have a GoFundMe page set up to help the family with costs.