10 US Airstrikes Hit ISIS in Iraq and Syria 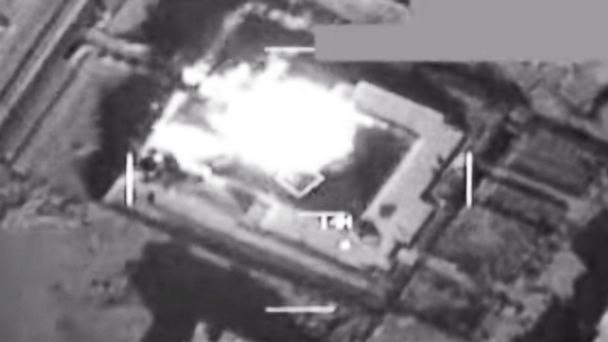 ABCNews
By BEN CANDEA
The U.S. military has conducted 10 airstrikes against ISIS in Iraq and Syria since Thursday, according to U.S. Central Command.

The United States used a mix of fighter jets and drones to conduct the airstrikes.

Digital Feature: Who Is ISIS?

ISIS is said to be one of the most well-funded terrorist groups ever because it is generating its own funds through the illicit sale of oil from seized oil fields inside Syria.

Pentagon officials have said that airstrikes inside Syria would be a mix of planned strikes targeting stationary targets and what are known as "targets of opportunity" that present themselves when U.S. and coalition aircraft are overhead.

"You'll see a mix of what we've seen in Iraq the last several weeks, the result of active ISR that are armed," Pentagon spokesman Col. Steve Warren said Wednesday, referring to intelligence, surveillance and reconnaissance aircraft, both manned and unmanned that are flying over Iraq and Syria.

"We'll strike targets of opportunity when present. Additionally, ISR will allow us to develop more stationary targets we can strike when we choose."

Those would be planned missile strikes. "I think you're going to see a mix in coming days of both," Warren said.

A U.S. official said today that these latest strikes inside Syria targeting that destroyed four tanks were target-of-opportunity strikes.

"We are trying to remove the means through which this organization sustains itself. That's the goal," he said.

He described the airstrikes occurring inside Iraq as being more tactical with the aim of helping Iraqi Security Forces "take back territory or ground, like the Mosul Dam, or to prevent attacks on them and their forces or Iraqi citizens."