US drops 'mother of all bombs' on ISIS forces in Afghanistan 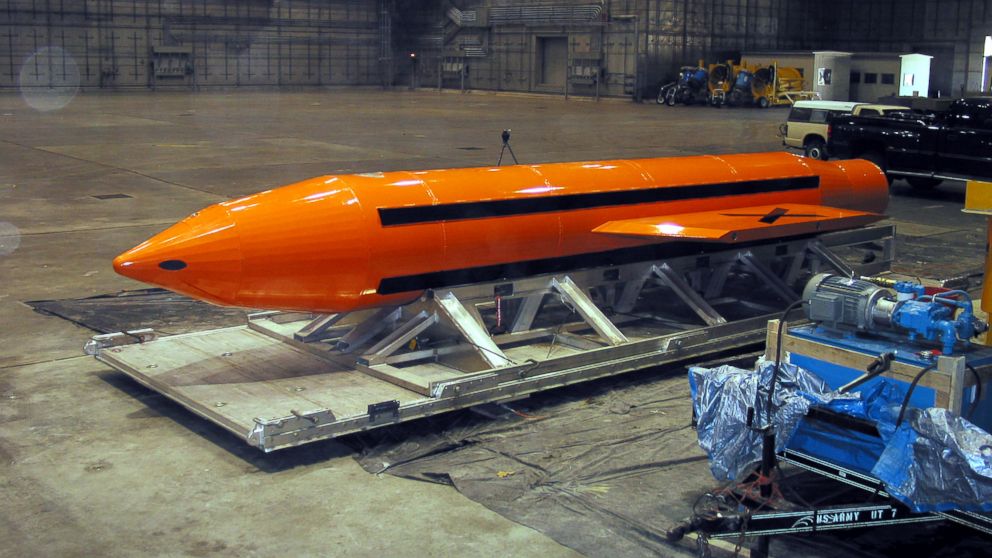 Targeting an ISIS cave complex in eastern Afghanistan on Thursday, the U.S. military dropped a 22,000-pound bomb nicknamed "the mother of all bombs," the largest non-nuclear weapon ever used in combat by the U.S.

Formally known as the GBU-43, or massive ordnance air blast (MOAB) bomb, it was developed in 2003.

Thursday was the first time the MOAB has been used in combat.

"The strike used a GBU-43 bomb dropped from a U.S. aircraft," the statement continued. "The strike was designed to minimize the risk to Afghan and U.S. forces conducting clearing operations in the area while maximizing the destruction of ISIS-K fighters and facilities."

The bomb was dropped from the rear of an MC-130 aircraft, said Adam Stump, a Pentagon spokesman.

The bomb is so large that it is carried in the cargo hold of the aircraft then rolled out the plane's rear door toward its target.

"As ISIS-K's losses have mounted, they are using IEDs, bunkers and tunnels to thicken their defense," said Gen. John W. Nicholson, the commander of U.S. Forces - Afghanistan. "This is the right munition to reduce these obstacles and maintain the momentum of our offensive against ISIS-K."

The military statement added, "U.S. forces took every precaution to avoid civilian casualties with this strike. U.S. forces will continue offensive operations until ISIS-K is destroyed in Afghanistan."

Defense officials said Gen. John Nicholson, the top U.S. commander in Afghanistan, had the authorities to use the bomb as part of the larger authorities to fight ISIS granted to his command in January 2016.

One official described the use of the MOAB as "the right weapon, the right target, and the desired effect."

Afghan forces and the American troops advising them have engaged in heavy fighting with ISIS forces in Afghanistan over the past year.

An American special operations soldier was killed last weekend in combat operations against ISIS in Nangarhar province, where the bomb was dropped. A defense official told ABC News there was no link to that incident since the bomb drop had been planned months ago.

"Everybody knows exactly what happened, and what I do is I authorize my military ... we've given them total authorization," he said.

He added, "Frankly, that's why they've been so successful lately," saying recent weeks stand in contrast to the last eight years under former President Barack Obama.

But Trump may have been referring to the broader authorities provided to the U.S. military in the fight against ISIS in Afghanistan since a defense official said the use of the bomb did not require presidential authority.