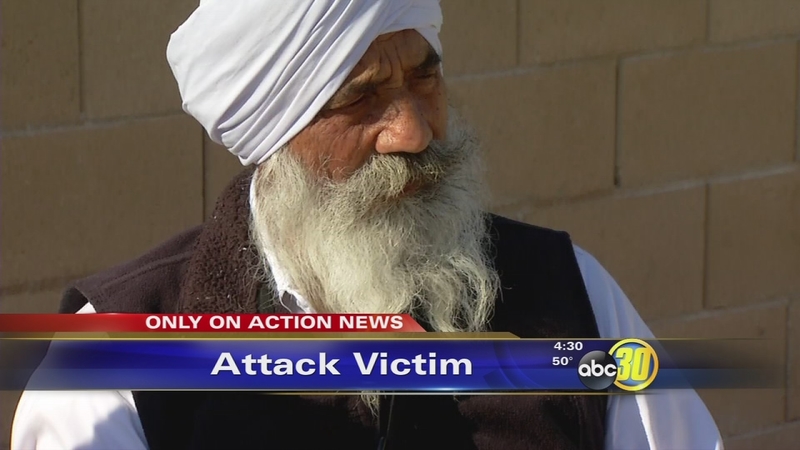 FRESNO, Calif. (KFSN) -- An elderly Sikh man who was assaulted by two men in a Fresno neighborhood is recovering and he talked with Action News about the brutal attack.

68-year old Amrik Bal is battered and bruised. He is still in pain - wondering why he was attacked and he is living in fear.

It set in on Saturday when he was behind his home near Shields and Brawley, waiting to get picked up for work. It was a foggy morning. Bal says two men pulled up in a car, they yelled at him, they punched and kicked him to the ground. He tried to protect himself, he tried to run but he couldn't get away.

"They hit me, they strike me with the car and I fell down," Bal said.

Bal was taken to the hospital and sent home with stitches behind his ear and a sling on his arm. His collar bone is broken and he has an open wound on his head. His son, Balbir Singh who just survived cancer has been taking care of him and both men are unable to work.

Singh said, "I was working on my own and my father was working on his own and we both were taking care of ourselves, paying our bills but now it is hard on us."

Fresno Police, the FBI and the US Attorney's Office are trying to track down the men who beat up Bal. The problem is, Bal didn't get a good look at them and he says he couldn't understand what they were saying to him.