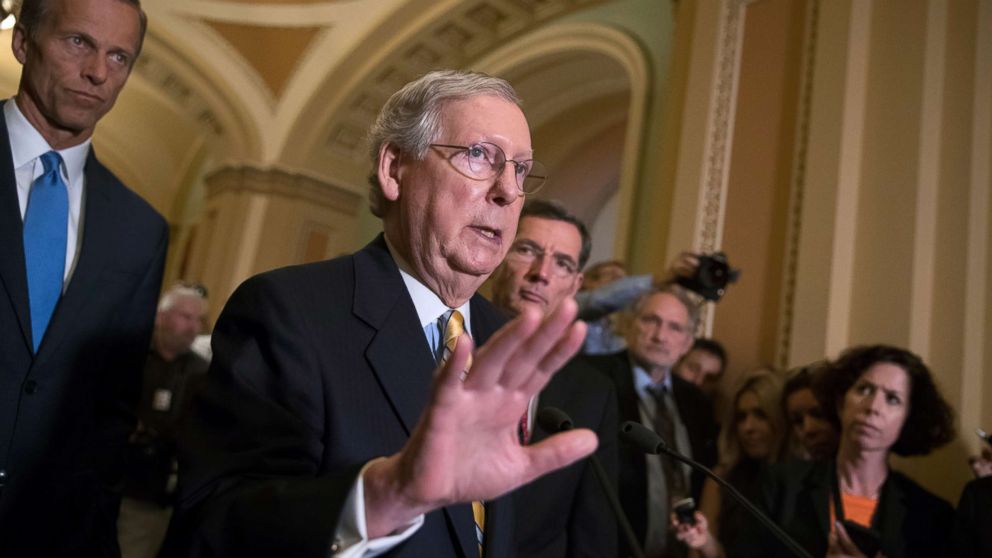 Senate Majority Leader Mitch McConnell told Republican senators he is delaying a vote on the GOP health care bill until after the Fourth of July recess because he does not have the votes to move it to debate, two senior Senate Republican aides told ABC News.

Senate Majority Leader Mitch McConnell confirmed the delay, saying, "We're going to continue the discussions within our conference on the differences that we have."

Sen. John Thune, R-Neb., stressed that the goal was to still replace Obamacare.

"While the schedule may have slipped a little bit, we are intent on rescuing Americans from a failed system that has driven up their cost and made it more difficult for them to find coverage," he said.

Earlier today Senate Majority Whip John Cornyn told ABC News, "I expect to have the support and get it done ... and yes, we will vote this week."

At least five Republican senators said they would oppose a procedural vote on the GOP health care plan as it stands, effectively blocking the bill from reaching the Senate floor.

In order to pass the bill in the Senate, Republicans can afford only two defections; in case of a tie, they have the option of calling in Vice President Mike Pence to cast the tie-breaking vote.

Before the delay was announced, Republicans senators were invited to the White House for a meeting with President Trump.

"The president invited us to come down," McConnell said at a news conference this afternoon. "The White House has been very much involved in these discussions. They're very anxious to help, and we appreciate the invitation, and I hope all of our members will head down"

After President Trump's meeting with almost all Senate Republicans on Tuesday afternoon, McConnell stood by his previous word on the delay, stating, "I had hoped, as you know, that we could have gotten to the floor this week but we're not quite there. But I think we have a really good chance of getting there. It will just take as you little bit longer."

He remains steadfast that the delay is not a substitute for inaction. McConnell told ABC News Chief Washington Correspondent Jonathan Karl, "It will be dealt with in one of two ways -- either Republicans will agree and change the status quo or the markets will continue to collapse and we'll have to sit down with [Democratic Sen. Chuck] Schumer, and my suspicion is any negotiation with the Democrats would include none of the reforms that we would like to make both on the market side and the medicaid side." McConnell concluded, "So for all of those reasons, we need to come up with a solution."
Report a correction or typo
Related topics:
abc newsnational
Copyright © 2021 ABC News Internet Ventures.
TOP STORIES
Traffic hazard: Big rig overturned on Highway 99 in Pixley
Elderly woman killed in hit-and-run crash in Fresno, police say
Fresno Co. health officials seeing more COVID cases in ages 10-30
Police: 1 in critical condition after shooting in east central Fresno
Fresno likely to enforce vaccine, testing mandate for employees
Man shot during suspected road rage incident in NW Fresno, police say
2 Livingston officers arrested for allegedly filing false report
Show More
Parents protest school mask requirement at Island Union board meeting
Club One Casino relocation plans pushed back a month
Fresno's Hmong community reacts to Sunisa Lee winning gold medal
Mother shot in southwest Fresno 'not intended target,' police say
CUSD to hold special meeting regarding masks on campuses
More TOP STORIES News