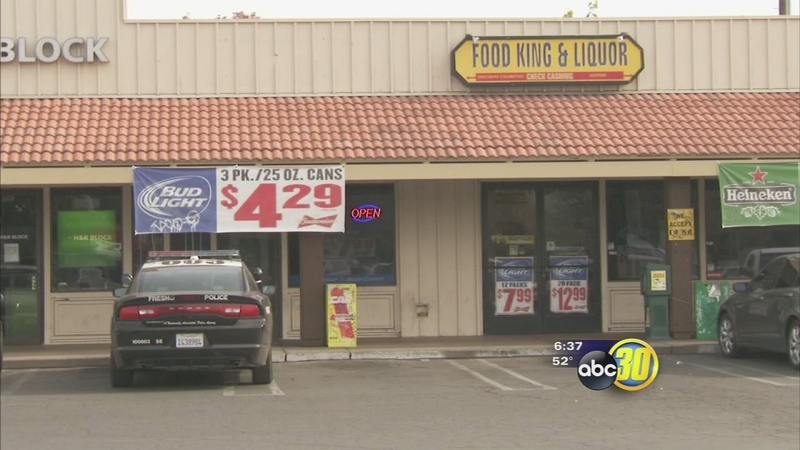 FRESNO, Calif. (KFSN) -- A 59-year-old woman was badly beaten during a robbery at her central Fresno liquor store. But police shot and arrested the suspect a few blocks away as he fled on foot.

Fresno police shot the robbery suspect along a Central Fresno canal bank. Thirty-six-year-old Roy Salinas was hit in the back with less lethal bean bags before being taken into custody. "Shot the suspect, I believe, four times. He did go down on his knees. Refused to comply then dived into the canal. Swam across on the west side of the canal," explained Lt. Joe Gomez, Fresno Police Department.

Police said he beat up a woman behind the counter at the Food King and lIquor Store several blocks away during a robbery. "Her face is swollen. She's bleeding in here a great deal," said Lt. Gomez.

The woman was taken by ambulance from the store, first to the canal to identify the suspect before she was treated at the hospital. The attack upset many in the shopping center. "That was uncalled for. He didn't have to go that far. She's a really nice lady and this and that. She's real nice to everybody," said Phillip Antonio, pizzeria owner.

Salinas was charged with robbery and felony assault. "Certainly his fists were weapons. He's a good sized guy. She's not," said Lt. Gomez.

The attack surprised pizzeria owner Antonio. "You put your guard up now, but you really don't have that kind of trouble here."

The woman's husband told us no cash was taken. The only thing he got away with was a pack of cigarettes.

The woman was taken to Clovis Community Medical Center to be treated for a possible broken nose and broken jaw.