KFSN
By Brian Johnson
CLOVIS, Calif. (KFSN) -- We're learning more about the Clovis preschool teacher who died after being hit by a car last night.

Clovis Police said a car heading south on Villa Avenue near Bullard Avenue hit Stout in the roadway Thursday night. The driver stopped, and a witness told Action News broken street lights may have played a role in the crash. We checked, and we found one street light out where the accident took place. Clovis Police said they've notified PG&E, the owner of the light. PG&E says there aren't any wiring problems with lights in the area and say the turnaround for fixing any broken bulbs is up to five days.

We spoke with Dana's daughter Tiffany Stout, who lives in the Denver, Colorado area. "She was my cheerleader and my rock and my best friend and this is going to be really hard," Stout said.

Stout said her mother was a dedicated preschool teacher for Clovis Unified School District, who had a love for learning and wanted to better herself by getting her master's degree at Fresno State. "(She was) very thoughtful and well planned with her lessons, just trying to be the best that she could be for the kids," Stout said.

Clovis Unified issued a statement on Friday, saying they were heartbroken over Stout's sudden death. She worked for the district since 1993. In part, it said, "Dana was a beloved member of the child development program where she taught preschool aged students at multiple sites in the district (most recently at freedom elementary school)."

"I know that she was looked upon highly and she mentored many other people and some of her former students are now adults and they had a huge impact on her life," Stout said.

She also had an impact on them through the years. Stout said one of her mother's students had hoped her son would soon be in her class. But a tragic accident on the roadway, has taken that hope away.
Related topics:
clovistraffic fatalitiescloviscar accidentpedestrian struckteacherfresno countyclovis unified school district
Copyright © 2020 KFSN-TV. All Rights Reserved.
FRESNO COUNTY 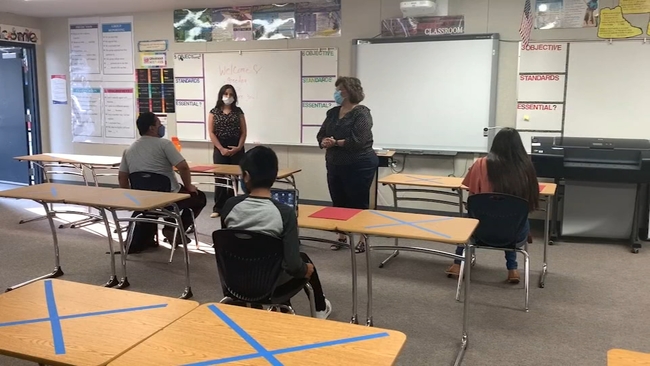