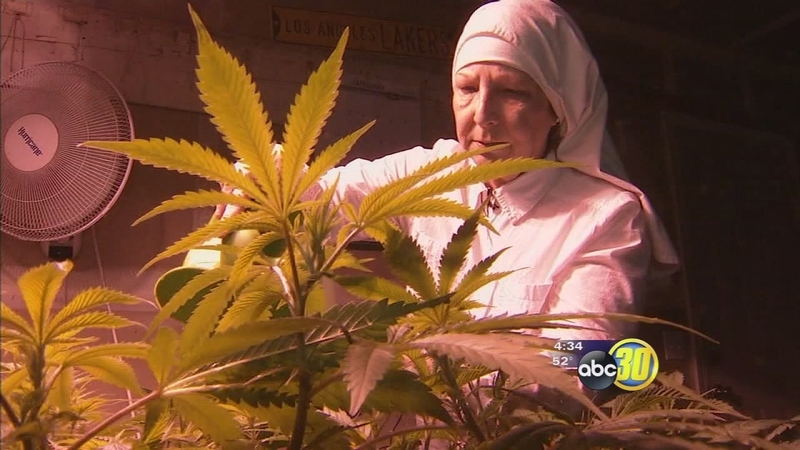 MERCED, Calif. (KFSN) -- The "Sisters of the Valley" have been producing salves and tonics made with cannabis. While their products won't make anyone high, they are fighting to keep the city council from putting them out of business.

The new year marks the first anniversary of a marijuana-based business in Merced. The sisters are not members of a religious order but they say they are on a spiritual quest to heal the sick with their cannabis cures.

Sister Kate and Sister Darcey are tending their small crop of marijuana plants in the garage of the home they share in Merced. They consider themselves nuns, but are not Catholic, or traditionally religious. They produce a variety of products made from the cannabinoids or CBD's found in the marijuana plant. Their plants do not contain THC, the substance that creates the marijuana high. They believe creating these healing substances is a spiritual quest. "We spend no time on bended knee, but when we make our medicine it's a prayerful environment it's a prayerful time," said Sister Kate, medical marijuana grower.

Videos of their operation, set to music have become popular on the Internet. It's Sister Kate's business -- Sister Darcey is her apprentice. "It's more for me about the sisterhood and the feminist movement, to live and work with other women and to do a positive thing for the community -- and obviously for the world since we ship it everywhere," said Sister Darcey, apprentice.

They sell their product online at Etsy, a web market known for handmade, handcrafted items. They claim their substances offer a treatment for a lot of problems. "We make CBD oil which takes away seizures, and a million other things," said Sister Kate. "And we make a salve, that's a multi-purpose salve... and we found out that it cures migraines, hangovers, earaches, diaper rash toothaches."

But their production is threatened. The Merced City Council is considering a proposed ban on all marijuana cultivation. "Yes it's frustrating to me because there are all of these people with negative attitudes about something that is truly God's gift," said Sister Darcey.

The city council will consider banning all marijuana growing in Merced next week. The sisters and their supporters are hoping to keep what they do legal. "Embrace, regulate and tax, that's all we want them to do," said Sister Kate.