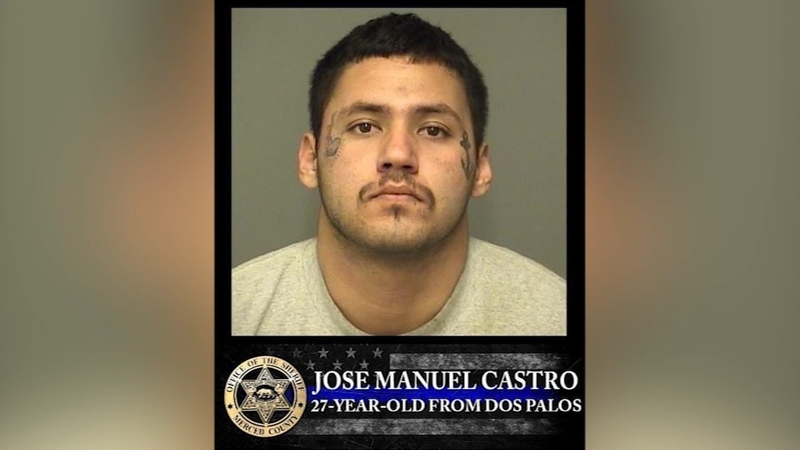 DOS PALOS, Calif. (KFSN) -- The suspect who was shot and killed by Merced County deputies near Dos Palos on Sunday has been identified as 27-year-old Jose Castro

Sheriff Vern Warnke says he was arrested for domestic violence and child endangerment in 2017 but pleaded to false imprisonment for a shorter sentence.


Action News has confirmed that Castro was just released from Corcoran State Prison on May 20.

Warnke says his deputies did everything right to protect four family members who were being held at knifepoint early Sunday morning.
"After reviewing the footage from the body cameras, all I can say is wow. These two deputies, both of them probably 2 years' experience, they made decisions like a 20-year veteran would have done," says Warnke.

The deputies first went to the home on Ida Street after Castro allegedly threatened to stab his girlfriend, her two children, and his own child.

They could see the suspect through the window, pacing the hallway with two large kitchen knives as the victims were trapped in a bedroom with no lock.


After 40 minutes of trying to negotiate their release, Warnke says the deputies were suddenly forced to fire.

He explains, "At the last instant, this guy charged at the woman and the children, and the deputies responded almost instantaneously together, fired their weapons, striking this guy to prevent him from getting inside."
The deputies then kicked down the front door and got the victims out of the house before performing CPR on Castro, but he died the scene.

This comes just eight months after one of those same deputies was shot in his bulletproof vest and returned fire at a suspect who was later arrested near Livingston.

Warnke says it's unfortunate this latest incident ended with Castro being killed, but he's thankful no one else was hurt.


"The bottom line is we had two hero deputies who saved some innocent people from injury or death, and I stand firm on that," says Warnke.

Authorities are now waiting on toxicology results to determine if Castro was under the influence of drugs at the time of the shooting.

Both deputies are on paid administrative leave and being offered counseling, which is standard practice.