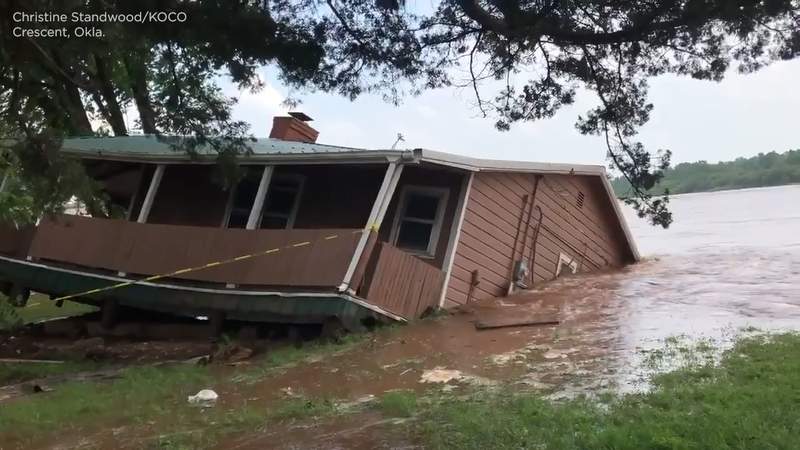 CRESCENT, Okla. -- A rain-swollen Oklahoma river swept away a home on its banks Wednesday evening as severe weather continued to hammer the area.

Video from KOCO-TV showed the Cimarron River swallow the Crescent, Oklahoma, home, which could be heard being torn off of its foundation before the river carried it away.

KOCO's helicopter later spotted the remains of the structure downstream, where a group of trees appeared to have blocked it from floating any further. The top of the salmon home's green roof was all that remained visible as floodwaters raged around it.

💔WASHED AWAY: The house in Crescent, Oklahoma, that fell into rising floodwaters came to rest in the Cimarron River. All you can see of it now is its green roof. #koco5 #oklahoma #oklahomaweather #storms #flooding pic.twitter.com/mY0qiD2y6y

Some residents living along the river evacuated after swift currents eroded the riverbank and undermined the soil beneath their homes, leaving them dangling over the raging river. One unoccupied home rolled off the river bank and into the Cimarron on Tuesday, and authorities said parts of others are hanging over the riverbank and are threatened with collapsing.

Some residents along a rain-swollen Oklahoma river are evacuating after swift currents eroded the riverbank and undermined the soil beneath their homes, leaving them dangling over the raging river.

In the Twin Lakes neighborhood, one resident was recording video as floodwaters picked up a large shed on a riverbank that was overwhelmed by water, washing it downstream.

Severe storms that have spawned tornadoes in Missouri, Kansas, Oklahoma and Iowa, has also dropped up to 9 inches of rain on parts of Oklahoma during the past week. That's caused many rivers and streams to overflow their banks.